Uddhav Thackeray will on Friday take charge of his office after taking oath as chief minister of Maharashtra yesterday.

In view of this, security arrangements are being made at the Maharashtra Secretariat.

Uddhav Thackeray held a cabinet meeting after swearing in as chief minister where his government announced to sanction Rs 20 crore for the development of Raigad. 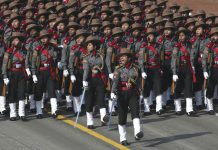