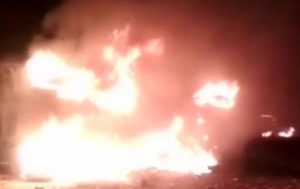 At least six people were killed and several others were injured on Tuesday morning in an explosion that took place inside the Army depot in Pulgaon area of Wardha district in Maharashtra.

According to the reports, the explosion took place while disposing of explosives.

“An artillery shell exploded during handling at an Army depot at Wardha, Maharashtra,” the Army said.

The incident happened when the ammunition was being taken to an open ground at Pulgaon Army depot.