To provide medical aid to people in flood-affected areas in the state 162 medical teams are active at various places. Survey of patients suffering from fever, dysentery, jaundice, etc. in villages where flood has receded is being conducted and so far survey of 14000 houses has been done. Medical and Healthcare system is ready to check the spread of infectious diseases by taking preventive measures, said Health Minister Eknath Shinde here today.

As pre the report of the Health Department heavy to very heavy rainfall was recorded in Mumbai, Thane, Palghar and Raigad in Konkan division, Nandurbar, Dhule, nasik in North Maharashtra, Pune, Snagli, Satara, Kolhapur in Western Maharashtra and Nanded and Hingoli districts in Marathwads besides Gadchiroli and Chandrapur in Vidarbha region.

According to primary estimates nearly 1.14 lakh population is flood affected. Kolhapur division has the maximum number of 36 villages while in Thane 18 villages are affected.
Three villages in Satara and two in Nasik are also affected by the floods.

Detail instructions regarding arresting the spread of water-borne diseases and they are taking preventive measures. Purification of 40 wells in the flood-hit areas has been done and the health system is instructed to use bleaching powder, chlorine tablets and chlorine liquid.

Due to water logging in Konkan Division, Navi Mumbai, Thane and Mumbai due to heavy rains, the danger of leptospyrosis is there. To check this the health system is directed to spray smoke and medicine to check the mosquito breeding with the cooperation of the municipalcorporation. Preventive tablets for leptospyrosis should be distributed to persons
who walked through the water logged areas. The Health Department is directed to hold health check up camps in flood-hit and water logged areas, the Health Minister said.

The stock of medicines for infectious diseases is sufficiently available. Nine lakh tablets for swine flu are also available and treatment for leptospyrosis is available at primacy health centers, sub-district hospitals, the Health Minister said. 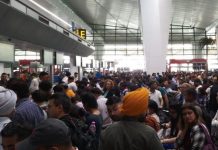