At least eleven people were killed and four were critically injured on Saturday after a truck rammed into a van in Chandrapur district of Maharashtra.

According to reports, among the dead were seven women and two minors.

The accident took place around 9:30 PM when the van, with 14 occupants, was travelling on the Korpana-Wani road.

The injured were shifted to local hospital for further treatment. 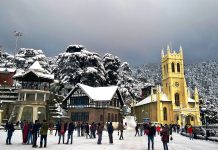