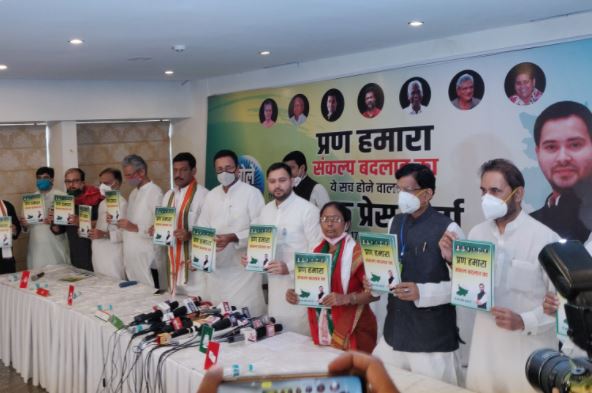 The Mahagathbandhan alliance in Bihar –the Rashtriya Janata Dal (RJD), Congress and Left parties on Saturday released its poll manifesto for the upcoming assembly election in the state.

The manifesto was released by RJD leader Tejashwi Yadav in the presence of Congress leaders Randeep Singh Surjewala and Shaktisinh Gohil.

Calling a ‘double-engine government’ in Bihar, Tejashwi Yadav said that despite Nitish Kumar governing the state from the past 15 years, Bihar has not been accorded the special category status.

Promising to provide jobs to 10 lakh youth as soon as the grand alliance is elected to power, Tejashwi said adding that his government will bear the travel expenses of the candidates appearing for exams.

Speaking at the occasion, Congress leader Randeep Singh Surjewala said that if ‘Mahagathbandhan’ forms the government, it will pass a Bill in the first Vidhan Sabha session to scrap the three ‘anti-farm laws’.