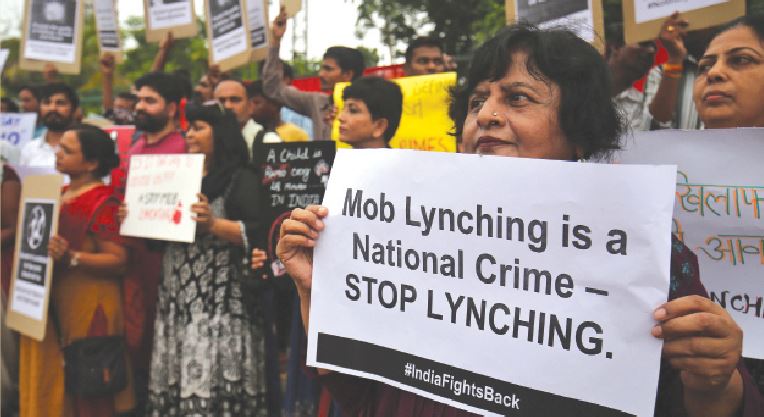 The Ministry of Home Affairs (MHA) is not keen to enact a law to prevent mob lynching and hate crimes in keeping with the judgment of July 17, 2018 by the Supreme Court of India in Tehseen Poonawala case. The MHA maintains there is no direction in the impugned judgment to this effect, it is learnt officially. However, the MHA shifts the responsibility to the States and Union Territories who administer Police and Public Order in the scheme of the Constitution of India to deal with mob lynching and hate crimes.

Hence, anti-mob lynching and anti-hate crime law not the baby of the Centre. Simultaneously, the Centre has not allowed the National Crimes Record Bureau (NCRB) to record incidents of hate crimes for fear of exposure of its and BJP IT Cell’s and Sangh ruled states’ complicity in hate mongering together with the so called captive mainstream media as also on social media.

Meanwhile, Union Government has taken up omnibus review of the existing criminal laws to make them relevant to contemporary law and order situation to provide speedy justice to the vulnerable sections of the society. For such things to happen, the Government of India intends to create a legal structure, which is citizen-friendly, that priorities to secure life and preserve human rights.

But given the divisive and communal politics indulged in by SanghPariwar in the BJP ruled states wherein mob lynching and hate crimes are at its crescendo, the victims who are minorities, Dalit and women, reverse FIRS are lodged and victims harassed and implicated and the perpetrators emboldened to go scot-free.

Well-meaning citizens, men and women of substance, good will and trust apprehend that in the garb of restructuring criminal laws, such abominable aberrations should not get legal sanctions to complete the process of all round fascism and authoritarian regime, thus subverting the rule of law based Constitutional democratic governance.

People will appreciate Union Government’s intent widely if it ratifies the United Nations Convention Against Tortures-1984 by repealing the provisions of torture by police and other law enforcement agencies.

India is already a signatory to the UN Convention. Two other important measures to be taken should include separation of investigation from police and creating a dedicated organization for investigation to minimize corruption in police as per the recommendations of Justice Malimath Committee Report on Criminal Justice Reforms to improve justice delivery, besides repealing the clause in all criminal laws that decision taken in good faith by officials in implementing such laws cannot be questioned in courts of law.

This clause is pernicious with vestiges of colonial oppressive rule that avoids accountability to the people. Hence, undemocratic. The MHA states that Police and Public Order is State Subject in the Seventh Schedule of the Constitution of India. So State governments are responsible for prevention, detection, registration and investigation of crimes and for prosecuting the criminals through their law enforcement agencies.

However, the MHA has been issuing Advisories to States and Union Territories from time to time asking them to maintain law and order and to ensure that person who takes law and order into his/her hand is punished promptly as per the law.

An Advisory to this effect was issued on July 4, 2018 to the States and Union Territories to keep watch on circulation of fake news and rumours with potential to incite violence, take all required measures to counter them effectively and to deal firmly with persons taking law into their own hand.Further, Advisories were issued on July 23, 2018 and September 25, 2018 for taking steps to curb incidents of mob lynching in the country.

The MHA has also sensitized the Internet Service Providers (ISPs) and the social media directing them to take steps to check the propagation of fake news/false news and rumours that have potential to incite mob violence and lynching. Incidentally, the MHA is yet to issue direction to the NCRB to record hate crime data. Supreme Court of India had proposed anti-hate crime and anti-mob lynching law although there are adequate provisions in Indian Penal Code, 1960 to deal with hate crimes effectively.

Three years since the Supreme Court judgment, there appears to be hesitancy or no move to enact such law as it suits the divisive and communal politics of the Sangh Pariwar to consolidate majoritarian votes. Criminal justice and criminal laws are in the Concurrent List of the Constitution, empowering both the Central and State Government to exercise power equally and alike. In such a situation, the MHA shifting responsibility to States and Union Territories is worrisome!