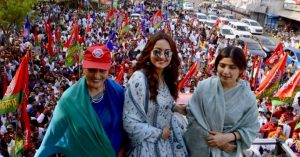 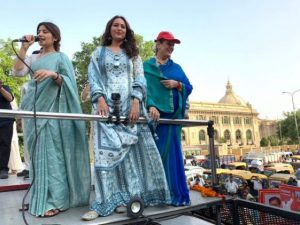 Raj Nath Singh is now inherited the legacy of BJP founder Atal Bihari Vajpayee as since 1991 Congress has not been able to retain back it. Now Congress Party has fielded Parmod Krishnan who has long been working for peace and amity in the society across religious barriers. He commands respect among minority communities and their worship masters.

Since 1952 onwards Congress Party won the prestigious seat of Lucknow until 1991 baring 1977 and 1989. Even BJP stalwart Atal Behari Vajpayee lost election on this seat in 1957, 1962 and a by-election. Hemvati

Nandan Bahuguna and Mandhata Singh won this seat in 1977 and 1989 respectively.

Pundit Jawahar Lal Nehru’s sister Vijay Laxmi Pundit won this seat first time in 1952 but she was appointed in United Nations and it led to by-election. The electorate of this town sent B K Dhaon, A.N. Mulla and Mrs Sheela Kaul to Lok Sabha.

Post Mandal and demolition of Babri Masjid scenario ruined the congress prospects from this town which is famous for its unique culture and history of peace and harmony. Even the Nawabs of Lucknow made Hanuman temple in the city.

The personal liberal image of Atal Behari Vajpayee across all sections of society enable BJP to enlarge it’s support base and since 1991 they dominate the electroal scene in the city of Nawabs.

This time Lucknow is witnessing triangular fight among BJP, SP-BSP and Congress. People feel the division of votes place BJP nominee Raj Nath Singh in a comfortable position. Some political analyst have their hunch that it has been designed mateculously to give walkover to him as his chances for Primeminister ship could be brighter in event of an hung parliament