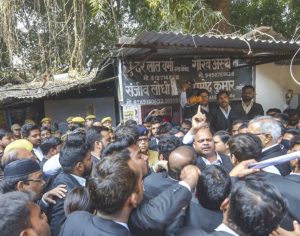 Following the daylight murder of an accused person and injuring two policemen before the judge in the crowded courtroom last December, the state government promised highly annoyed High Court that it will take immediate steps to provide safety and security of all the district courts in the state. Nevertheless, the bomb attack in the district court premises of the state’s capital Lucknow injuring four advocates had exposed all its preparedness to implement a fool-proof security plan.

People got sacred during the busy court hours when the Lucknow district and sessions court on February 13 when about 10 people attacked joint secretary of Lucknow Bar Association (LBA) Sanjeev Lodhi and hurled crude bombs in broad daylight, injuring four advocates. Police also recovered two live crude bombs on the spot which were defused by experts. There was a stampede-like situation with panic and fear gripped people running for safe passage and shelter.

The court has four gates, all fitted with door-frame metal detectors (DFMDs) and security equipment but the leaders of the bar are above such security checks due to VIP syndrome. However, CCTV footage installed nearly 40 meters away from the spot shows that Lodhi was standing outside his chamber amid the morning commotion. Suddenly 8-10 people, including a few wearing black (lawyers) coats, reached outside his chamber and there was a scuffle. Amid the scuffle, someone hurled a bomb and then the attackers ran away from the spot.

“The preliminary probe reflected that it was an outcome of enmity between two groups of lawyers who had a fresh round of scufflea day before on February 12,” said joint commissioner of police (JCP) Naveen Arora. “A crude bomb exploded. We have recovered some pieces of the bomb. Sanjeev Lodhi has filed a complaint against fellow lawyers and alleged that they were carrying weapons.”

Arora said Lodhi admitted that he had a fresh dispute with a group of lawyers on February 12 evening. “We are investigating the case from all angles,” he said. “It seems to be the fallout of a dispute between two groups and both the lawyers are office-bearers of the Lucknow Bar Association (LBA).”

“I have been told that some people are not frisked on the entry doors. We will review and enforce strictsecurity system,” the JCP added.

The attackers, allegedly including some lawyers, hurled crude bombs on Sanjeev Lodhi outside his chamber and one of the bombs exploded, causing injuries to the four people, the police said. Lodhi named Advocate Jitu Yadav (LBA general secretary) and his group is behind this attack,” Lodhi alleged.

On the basis of FIR lodged by Lodhi, the police arrested named accused Jitu Yadav, Annu Yadav, Azam, Sudhir Yadav, Ajaj, Dilip Singh and Ajay Yadav and 8-10 unidentified persons. “The accused have been booked for rioting, attempt to murder and violation of the Arms Act. We are searching for them.”

He added, “We are looking into the dispute between these two groups.”

Condemning the incident, the Bar Council of India (BCI) Chairman Manan Mishra demanded immediate arrest of the culprits. Reiterating the demand for enactment of Advocates’ Protection Act, he said such incidents justify BCI stand for protection. The Bar Council of Uttar Pradesh had asked bar associations to abstain from work to put pressure on the government to pass legislation to protect lawyers. Last month, lawyers had gone on strike in protest against the recent attacks on them in the state.

Bar Council of Uttar Pradesh Chairman Hari Shankar Singh also deplored violence in Lucknow court campus. He constituted a committee of ten prominent members under the leadership of Ajay Yadav advocate and asked to furnish a report by March 1, 2020.

Earlier also, security arrangements collapsed on January 7 when a young lawyer Shekhar Tripathi (32) was beaten to death with sticks by five men in Lucknow, triggering anger among his colleagues who sat with the body at the District Collectorate demanding justice. On December 17 last year, an accused person was killed and two policemen injured when unidentified assailants opened fire at Bijnor CJM’s court.

Expressing displeasure over criminal incidents in the court premises and its safety arrangements a division bench of the Allahabad High Court had come heavily expressing its concern observed last year, “If state government cannot provide adequate security in court premises then we will ask central government to deploy central forces.”

“Three recent incident of attacks on under trial in Muzaffarnagar, on a lady lawyer in Agra and now in Bijnor shows that now criminals are so fearless in state that they are now entering court rooms and killing people,”a bench of Justice Sudhir Agrawal and Justice Sunit Kumar had observed.

The court is actively monitoring the security concerns of all the premises of various district judge courts with the top bureaucracy of the state for creation of special force, installation of CCTV cameras, strengthening of broken boundary walls, removal of hoardings and posters obstructing security views, introducing gate pass system for litigants, biometric Identity cards for advocates and their clerks.

Congress General Secretary Priyanka Gandhi Vadra is missing no occasion to corner the Yogi government over question of poor law and order situation in the state. She lambasted in a tweet in Hindi, “UP government should accept that it lied to the people for three years. Criminals are having a field day in the state. Lawyers are being attacked with bombs in the courts in state capital. From the state capital to outskirts, nobody is safe.” “What kind of situation is this?” 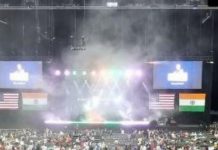