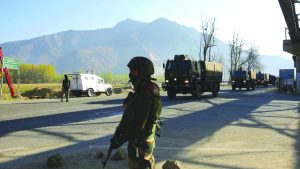 There is outrage in Kashmir over the Government ban on the movement of civilian vehicles along the state’s only highway for two days a week. On Sundays and Wednesdays, only security vehicles are allowed to travel along 270 kilometre stretch of National Highway 44 between Udhampur and Baramulla districts.

An April 3 order from the state’s home department said that the highway will be completely barred until May 31 for civilian traffic on the two days from 4 am to 5 pm to “facilitate the movement of security forces convoys” into the Valley. On the said days, not only is the highway made out of bounds for the people but many link roads connecting to the national highway are also blocked using barbed wires, preventing access of civilian vehicles on to the highway.

The government logic is that the ongoing Parliament elections in the state entail an intensified movement of the security vehicles in the state, rendering them vulnerable to attacks by the militants on the pattern of February 14  Pulwama bombing which killed over 40 CRPF personnel and triggered India, Pakistan skirmishes. More so, after the aborted second attempt along similar lines on a CRPF bus near Banihal. This time, mercifully, no security personnel was killed even though the car carrying explosives blew up and was reduced to charred remains.

There is thus an apprehension that more such attacks could be  mounted on security vehicles along the highway, resulting in the loss of the lives of the security personnel. And if the attack is believed to have originated from Pakistan, it can once again trigger geo-political consequences. So, the government doesn’t want to take any chances.

But the Jammu-Srinagar national highway of which the banned stretch is a part is the only road connecting Kashmir with the rest of India. So, the two days bring Kashmir to a grinding halt, massively inconveniencing the people and disrupting the businesses. People have to seek permission and have to have a solid reason for the movement and which is not humanly possible for the thousands of people which need to use the road.

In one case, a family whose wedding was scheduled on a Sunday had to seek permission for the movement of the groom’s baraat which has since gone viral on social media. “Shri Danish All s/o Showket Ali Bhat r/o New Qazi Bagh Anantnag District accompanied by 12 persons be allowed to move from Anantnag to Doda along with vehicles ——– in connection with marriage ceremony on 06-04-2019 and back on 07-04-2019 after proper frisking, security check. The permission is valid for 02 days only,” the order issued by the District Magistrate of Anantnag read. The order, however, was “subject to the Srinagar-Jammu NHW (National Highway) road clearance”.

In another case a man was granted permission to travel by a duty magistrate by stamping and writing on the palm of his hand, the picture of which  trended on the social media with people criticising the ban. The ban order has become emblematic of New Delhi’s  new harsh approach towards the state. It has also invited comparisons with Polish government order during German occupation of Poland in December 1939 which prohibited Jews from entering or using pathways, streets and public squares from 9 p.m. to 5 a.m.

issued strong statements against it. “Kashmir belongs to Kashmiris. We can’t be banned from our own roads,” Mufti said during a protest against the ban. She also appealed to people to not  accept the ban and defy it. “This is Kashmir, not Palestine. We wont allow you to turn our beloved land into an open air prison,” she said.

Similarly, Omar termed the ban “mindless”. “Driving to Uri I’m getting to see first hand the extent of disruption & inconvenience that is being caused to people because of the mindless highway closure order that is in place today,” he said.

People’s Conference leader Sajad Lone said the ban was “turning into a humanitarian disaster”. “Flooded with calls from across the state. People in dire need to travel in order to tend to their day to day needs of survival stuck in a state of helplessness. @jandkgovernor urgently needs to scrap the inhuman order,”  Lone tweeted.

However, this outrage has made little redeeming difference on the ground. Troops from police, CRPF and the army are posted along the national highway at every 500 to 1000 metres to enforce the ban. Some senior officers are also placed on the road to issue passes to the people in case of emergency. But it hardly helps lessen the hardships faced by the people.

“An elderly man with his ailing child pleaded with the magistrate to let him go at HMT crossing. He was simply turned back and asked to find some other route,” posted a journalist on social media along with the picture.

The move has also created some unease within the security establishment with some press reports quoting unnamed security officials debunking the ban order. In fact, the former Army chief General V P Malik has termed it a dumb idea.

However, the government, both in the state and at the centre, has shown no signs of revoking the ban. “Keeping in view the security of our forces and nation, we won’t succumb to any pressure and will not roll back the decision,” Singh said referring to the highway ban decision. “I am sure that this must have reached to the quarters concerned and they should now stop making hue and cry over this”.

Facing criticism for closing down the national highway connecting Jammu with Srinagar, the Union Home Ministry took refuge in statistics stating the total duration of prohibition is for 24 hours out of 168 hours in a week, which amounts to only 15 per cent of the time. “The state government…has already clarified in unambiguous terms, that out of seven days in a week, only reasonable restrictions have been imposed, that too for 12 hours, two days in a week,” the MHA statement said.

On the other hand, a group of twenty-six academics, analysts and former government servants including former Kashmir interlocutor Radha Kumar have written a letter to Singh to express their “deep distress at the continuing and indeed intensifying alienation of Kashmiris from the rest of India”. They have said that the moves like highway ban and the proscription of the parties like Jamaat-i-Islami and the JKLF undercut India’s “democratic credentials” and add to “disaffection” in Kashmir.

A petition has also been filed in the J&K High Court challenging the traffic order. The court has issued a notice to the union ministries of home and defence and the state government to furnish reply by April 19. But it seems unlikely that the government would revoke the ban until the election is over. The centre has so far been immune to the protests and inconvenience faced by the people. “At one level, this sad state of affairs is a comment on the BJP’s handling of Kashmir  over the past five years. The situation has now gone so far out of control that the centre has chosen to secure the land and forget about the people,” an editorial in a local daily states. “But the question is whether this policy is sustainable. And whether alienating and invisibilizing  the people from its outlook on Kashmir would usher in the peace?” 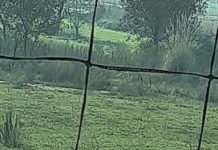