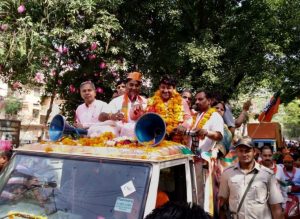 He is re-contesting from the North East Delhi Lok Sabha seat.

Hundreds of BJP supporters participated in the roadshow.

The elections on all the seven seats in Delhi is scheduled on May 12, in the sixth phase of polling and the counting of votes will take place on May 23.