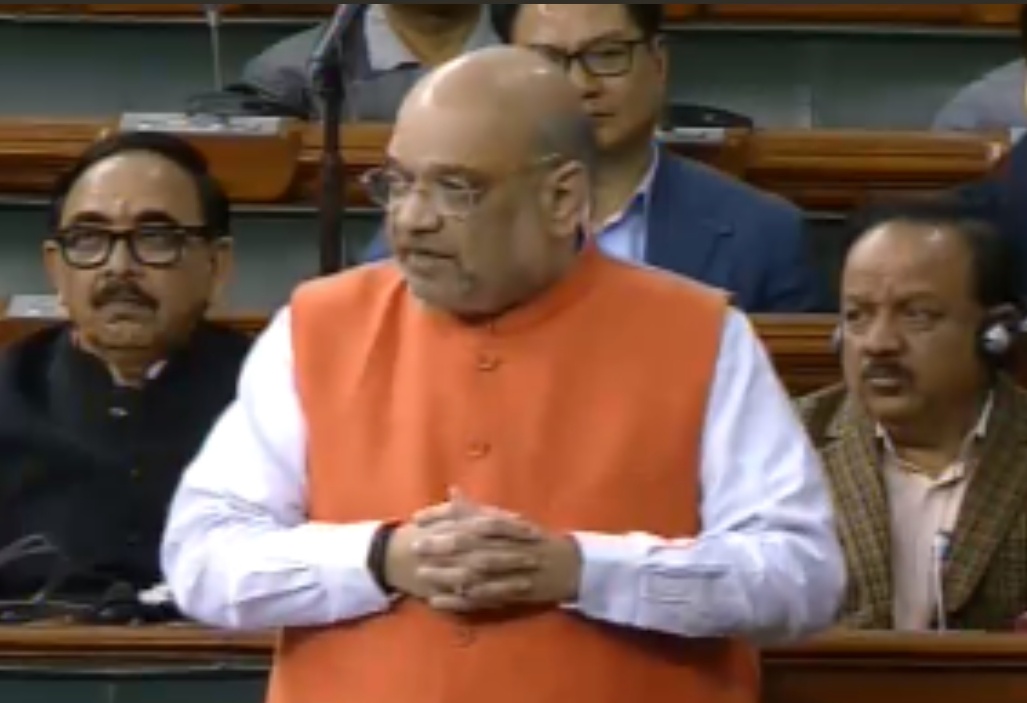 The Lok Sabha today passed the Citizenship (Amendment) Bill 2019. The bill was passed with 311 votes in favour whereas 80 votes were against it. The Bill seeks to grant Indian Citizenship to persons belonging to Hindu, Sikh, Buddhist, Jain, Parsi and Christian communities who have migrated to India after facing persecution on grounds of religion in Pakistan, Afghanistan and Bangladesh, if they fulfil conditions for grant of citizenship.

Introducing the Bill, Union Minister for Home Affairs,  Amit Shah said that while no where does this bill target India’s minority community, but illegal immigrants would not be allowed to stay in the country at any cost.

Replying to the debate, Shah said that misconceptions are being spread about the bill that it is against any particular community, but this is a humanitarian step to grant citizenship to those who suffered for the last 70 years. He said that failure of the Nehru-Liaqat pact of 1950 is also one of the reasons of bringing about this Bill. He further said that it was Congress Party which accepted the partition of India on religious ground and therefore the need for the Bill was necessitated. The Home Minister also asked the members to distinguish between the genuine refuges and the intruders. Shah said that Narendra Modi Government is committed to security and all equal rights to all and there would be no discrimination based on the religion.

Shah said that the provisions of the amendments to the Act would not apply to tribal area of Assam, Meghalaya, Mizoram or Tripura as included in the Sixth Schedule to the Constitution and the area covered under ‘The Inner Line’ notified under the Bengal Eastern Frontier Regulation, 1873. The Bill also seeks to amend the Third Schedule to the Act to make applicants belonging to the said communities from the aforesaid countries eligible for citizenship by naturalisation if they can establish their residency in India for five years instead of the existing eleven years. Making an important announcement,  Shah said that Manipur would be brought under the Inner Line Permit (ILP) regime and with that the problems of all the North Eastern States would be taken care of. He said, all the apprehensions of the North-Eastern States and that of Sikkim were addressed in the Bill and that is the reason they are supporting this Bill.

Amit Shah, while replying to the debate on the Bill, said that there is no political agenda behind this Bill but it is only a Constitutional process to give citizenship to those were denied basic civil rights for the last 70 years. He cited the provisions from Constitutions of Afghanistan, Pakistan and Bangladesh where they provide for a specific state religion. In this scenario, Shah stated that these countries have had a history of persecution of religious minorities viz., Hindus, Sikhs, Buddhists, Jains, Parsis and Christians. Some of them also have fears about such persecution in their day-to-day life where right to practice, profess and propagate their religion has been obstructed and restricted. Many such persons have fled to India to seek shelter and continued to stay in India even if their travel documents have expired or they have incomplete or no documents.

The Home Minister said that this Bill contains provisions to grant Citizenship to such refugees on reasonable grounds, which in no way go against any provision under the Constitution of India and does not violate Article 14. He also reassured that no provision of Article 371 would be violated by this Bill. The linguistic, cultural and social identity of the people of the North East would be preserved and this Bill contains the solution to the problems of the people of these States, as the provisions of the amendment have been incorporated after marathon deliberations with various stakeholders from North East for last one month. The issue should be seen as a humanitarian one, beyond political ideologies.

Talking about Right to Equality, Amit Shah said that Article 14 allows reasonable qualifications to its provisions and there have been instances in the past when refugees facing persecution in other countries have been granted Indian citizenship. Giving example of refugees coming from Bangladesh in 1971, he said that the Government of that time gave citizenship to these refugees. The Home Minister said that the inflow of refugees have not stopped after that. Refugees from Uganda were also given citizenship and same steps were taken during Sri Lankan crisis and after the signing of the Assam Accord in 1985. These decisions were based on reasonable qualifications to Article 14, he added.

Talking about another amendment to the Act,  Shah informed that the Bill seeks to amend section 7D so as to empower the Central Government to cancel registration as Overseas Citizen of India Cardholder, after providing a reasonable opportunity of being heard, in case of violation of any provisions of the Citizenship Act or any other law for the time being in force.

The Home Minister said that there is no merit in the questions raised by Members on the competency of Parliament to discuss this bill on the ground that it is against the basic structure and ethos of the Constitution. “I want to assure the Nation that this bill is not against any provision of the Constitution of India”, he said.