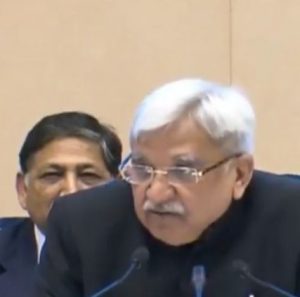 Assembly polls in Andhra Pradesh, Arunachal, Odisha and Sikkim will also be held simultaneously, the Election Commission (EC) said. However, elections for the Jammu and Kashmir assembly, which was dissolved after the ruling coalition between the BJP and the PDP fell apart, will not be held along with the Lok Sabha elections.

Chief Election Commissioner (CEC) Sunil Arora said that the model code of conduct has come into force as it announced the dates for the elections to 17th Lok Sabha and 10 lakh polling stations would be set up this time. Approximately 90 crore voters would be eligible to vote for 543 Lok Sabha constituencies across the country.

Sunil Arora said that the total electorate will be in the vicinity of 900 million or 90 crore of which 15 million or 1.5 crore are in the age group of 18-19 years.

After the Election Commission announced the schedule for the Lok Sabha polls, Prime Minister Narendra Modi urged the Indians to enrich the 2019 Lok Sabha elections with their active participation

“The festival of democracy, Elections are here. I urge my fellow Indians to enrich the 2019 Lok Sabha elections with their active participation. I hope this election witnesses a historic turnout. I particularly call upon first-time voters to vote in record numbers,” Modi said.

“Wishing all political parties and candidates the very best for the 2019 Lok Sabha elections. We may belong to different parties, but our aim must be the same- the development of India and empowerment of every Indian!” Modi added.

PM Modi further said, “the last five years have shown that with the blessings and participation of 130 crore Indians, what was earlier deemed impossible has now become possible. 2019 polls are about a spirit of confidence and positivity with which India is fulfilling the aspirations of its people.”

AAP head and Delhi Chief Minister Arvind Kejriwal took to his twitter account and tweeted, “Ultimately back to We the people -the real power of our democracy. Time to throw out the most dictatorial and anti-federal govt in the history of India. Time to seek answers on demonetisation, jobs, destruction of traders n destroying brotherhood amongst different communities.”

“Decision to hold only Parliamentary elections in J&K confirms sinister designs of GoI. Not letting people elect a government is antithetical to the very idea of democracy. Also a tactic of buying time to disempower people by pushing an agenda that suits their ulterior motives,” Mehbooba tweeted. 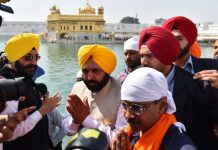 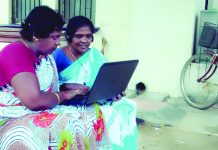