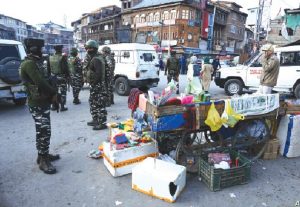 Speaking at a private function on October 6,  former J&K Chief Minister Farooq Abdullah lamented the lack of economic development in Kashmir since the abrogation of Article 370 on August 5 last year. He said the objectives of peace, economic progress and development in the former state cannot be achieved unless the Centre restores Article 370 that granted J&K a semi-autonomous status under India’s constitution.

“The goal of inclusive development in J&K can be turbo-powered only by empowering the people of Jammu and Kashmir in the real sense and by reversing the August 05, 2019 actions,” Abdullah who is also the Member Parliament from Srinagar said.

Abdullah was pointing towards over a year-long lockdown in Kashmir following the erasure of the region’s autonomy that has wrecked Kashmir’s economy. First, there was a seven month long security lockdown and communication blockade and then from March onwards there was Covid-19 lockdown for six more months. According to an estimate by the local business bodies, the Valley’s economy has so far suffered a loss of over 40,000 crore. Its fallout on the ground has been grim: thousands of people have lost their jobs. Sectors of economy like tourism, handicrafts, hotel industry, IT, transport etc have been crushed. People have been forced to shut down their old unviable businesses and start new ones. In one poignant case, a handicrafts shop on Boulevard was converted into a wazwan outlet.

Recently, Lieutenant Governor Manoj Kumar Sinha announced a relief-and-revival package of 1,350 crore to revive the Union Territory’s business sector. In addition, there is 1,400 crore package for J&K under the Aatma Nirbhar Abhiyan, of which 6,000 crore is for power sector reforms etc.

This was the first effort since August 5, 2019, to provide relief to the businesses.

The main component of the package is 5 percent interest subvention to all borrowers irrespective of their sizes, that would cost about 950 crore. The interest subvention will be available for six months in the current financial year. Also, the government announced a 50 percent waiver of fixed charges for one year with respect to electricity and water. which would cost 105 crore.

Though considering the egregious loss the businesses have suffered over the past fourteen months, the government stimulus is disproportionately less, but the Valley’s leaders are happy to get some relief after all.

“We must understand that the GOI and the state government are under tremendous financial crunch because of COVID-19 and present circumstances,” said Shahid Kamili, the president of Kashmir Chamber of Commerce and Industries. “I feel that they have done their part. Moreover, the honourable LG has said that this is just the beginning”.

The KCCI, Kamili added, had  asked for compensation for the losses right since August 2019. “That was the peak season of the year,” he said. “Our working capital and money had gotten drained by paying interests and installments. We feel that this particular portion must be still addressed to, unless that is done, no unit can revive”.

One silver lining for the economy, as elsewhere in India, is that the government is working to systematically reopen the economy. In Unlock 5, the government has now given green signal to reopening of the schools, cinema halls and religious gatherings subject to observance of Standard Operating Procedures.

Only threat to recovery is the reigning uncertainty in Kashmir and the ever present chances of a fresh turmoil in the region. Besides, it will take a long time for the tourism industry, the mainstay of the Kashmir economy, to get back on rails.