Q&A Bedabrata Pain, Filmmaker
AFTER 18 YEARS as a NASA scientist Bedabrata Pain (48) makes his directorial debut with Chittagong, a film about the 1930 Uprising where young men and women, led by schoolteacher Surya Sen, took on the British Empire. Pain talks to Aradhna Wal about recreating history and reaching for the arts via science.
EDITED EXCERPTS


How did Chittagong come about?
As a Bengali growing up in Bengal, I was so familiar with the Chittagong Uprising, I didn’t think a movie could be made of it. I’d read books on it — Suresh Dey’s first hand account of the Uprising’s Battle of Jalalabad. Talking to a Delhi University student in 2006, I realised people from outside the state didn’t know the story. As I started voicing the idea, someone told me about Subodh ‘Jhunku’ Roy, one of the participants in the struggle. I rushed to the hospital he was admitted to and met him two weeks before he died. I decided to tell this fascinating story from a boy’s perspective. Manoj Bajpai (as Surya Sen) and Nawazuddin Siddiqui have meaty roles. But the frail 14-year-old that Jhunku had been, the youngest boy to pick up a gun, is the mainstay of the film.
Why cinema after working with NASA for 18 years?
My mother tells me that I was a great storyteller as a child. I’m a very visual person. Even as a scientist, when I made pitches to sponsors I’d keep seeing what I was saying in my mind’s eye. That’s what cinema is. Seeing and saying come together. My life has been the 3 Idiots story. I was good in studies, told to go to IIT, topped my department and got an Ivy League scholarship. During my PhD, my friends and I invented the active pixel sensor and that set my life for the next 15 years. You get addicted to the work, as one would get addicted to cocaine. One day, my colleagues told me to plan for life as a chief scientist, and I had a vision of myself as doddering 60-year-old at NASA. That scared me. If I wanted to do something different with my life I’d have to do it now. Much as I love science, performance arts have an excitement that science doesn’t.
How has the transition been?
What’s tough is that I’ve gone from being the top person in my field, to scraping the bottom of the barrel. But, luckily for me, in the past five years independent films have been given unprecedented space.
As a scientist, what do you bring to film-making?
Structure. I went through 36 drafts of the screenplay, tracking each character to make sure their arcs aligned. Science is also about creativity, which many people forget. It’s about using known facts to create a new world with its own logic and rules. Force will be mass into acceleration, but you can go beyond that to come up with the theory of relativity. That’s how, using history, I’ve brought a film into existence. Every night, as everyone else slept, I would close my eyes and think of what I wanted to see.
How did you fund the film as a newcomer?
When I came up with the script in 2008, people loved it. Prasoon (Joshi) took it to Reliance who wanted to make the film. But, at the end of the year recession hit and I got caught. We were supposed to start shooting on 15 December 2008, but I was told that it had been put on hold. Then Ashutosh Gowarikar announced his film on the same subject(Khelein Hum Jee Jaan Sey) and I knew that I wasn’t going to get any money. Early 2009, I got the money from my patents and put every cent into this film. I am the producer director and writer of this film. It’s my baby.
What about the reports that Amitabh Bachchan stalled your film to push Gowarikar’s?
Amitabh Bachchan came and blessed my film. I’ve grown up watching him and Jaya Bachchan on the screen. It was a dream come true. What more can I say?
Aradhna Wal is a Sub-Editor with Tehelka.
aradhna@tehelka.com 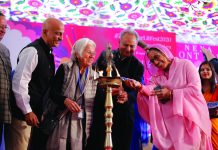