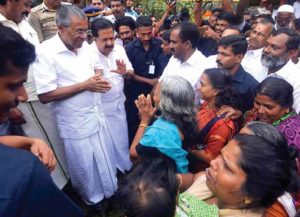 Ravaged and dislocated in the aftermath of deluge-a calamity declared as a worst disaster in the Kerala’s history, the victims of floods have manifested an incredible stoicism and resilience to bounce back. Keeping aside grief and misery, Malayalis were seen celebrating Onam (a 10 day long harvest festival celebrated annually) in the flood relief camps. The ordeal of losing essentials and comforts of life did not dissuade them from welcoming the King Mahabali, whose spirit, as per a popular legend is said to visit Kerala at the time of Onam.

Pinarayi Vijayan, the Chief Minister of Kerala had informed earlier that 483 people lost their lives in rain related incidents. Hundreds were admitted to hospital, besides many reportedly missing.

The loss is colossal. According to the Chief Minister of the state, the loss has been more than the Kerala’s annual plan. The state’s annual plan in the fiscal year 2017-18 was pegged at 26,500 cr. Later, it was claimed by the officials that the damage caused due to the worst floods and landslides in a century is approximately 30,000 cr. A government order said that the government department would not splurge on any function for one year. The government decree has refrained the departments to host any functions that involve expenditure and divert those funds on flood relief and rehabilitation.

The water has started receding and people have started returning to their homes from the relief camps. The psychological and emotional deprivation in the aftermath of floods cannot be measured and may remain seared into the memories of the victims for long time, but the economic impact of such disaster needs to be cured in a shortest possible time. The economic repercussions of such crisis are immense and large number of small scale and medium scale industries have been heavily hit. Besides the industry, the trade (shopkeepers, vendors, and self employed artisans and small distributers) have met huge losses.

Agriculture sector, which constitutes the backbone of the state’s economy, has also been ruined with an estimated 57,000 hectares of crops submerged. One crop is already lost and next i dependent on the timely pumping out of water from the inundated fields. The agriculture in Kerala is already in doldrums due to multiple reasons and the deluge may aggravate the existing crisis

“The loss to agriculture is being assessed but the damage is much morethan feared”, told P C Cyriac, a former bureaucrat who also had a stint as th Chairman of Rubber Board. Agriculture sector in Kerala is already in deep trouble. The rubber plantation has been suffering due to cheap imports from South East Asian countries. China has cut down the imports of rubber from these countries creating a glut in the producer countries. The Tyre companies were naturally inclined to buy cheaper rubber. The rubber grower s are organised but cannot exert pressure on the government to tweak policies in their favour. Close to 10 lakh small growers are engaged in rubber plantations. This calamity has accentuated their troubles.

Spice cultivation is strength of Kerala’s agriculture. Cyriac added that spices producers have been facing stiff competition from the cheap imports of Vietnam via Sri Lanka. Pepper imported from Vietnam is poor-quality. Under SARRC agreement India can import duty-free products from Sri Lanka. So this window of opportunity has helped the importers and traders flourish at the cost of local pepper producers.

Situation is bleak as one crop of paddy has already been swept under floods. Paddy is cultivated in approximately 2.5 lakh hectare. The second crop can be sown only when water is pumped out of the fields to make the land ready for sowing.

The loss of the trade and industry is being assessed by the government departments and insurance companies. The Kerala Chamber of Commerce and Industry has also been aggressively planning the course of action to revive the units damaged during the floods. The Chairman of the Chamber Biju Ramesh apprised that a large number of small traders and shopkeepers have been effected besides the industrial outfits. “A massive project is being designed in collaboration with the Chambers of Gujarat, Vishakhapattanam and other like-minded associations. This would be announced next week, he added. The loss to the tradeand industry has been pegged at 15,000 cr but these are only estimates. The actual value of loss can be higher.

The tourism sector has also endured the wrath of nature as the landslides and floods have caused extensive damage. The connectivity has been disrupted and it may take time to reconstruct the roads.

The tourism sector is hoping to make up for some loss as the Neelakurinji plants have bloomed this year. This occurs only once twelve years in Munnar in Nilgiri hills. This is expected to fetch domestic as well as foreign tourists. The Kerala Travel Mart, a biennial event organised to promote tourism in the state is also lined up in October and the players in tourism sector expect to do a brisk business.

The intelligentsia in the state believes that the crisis in the state would have caused more havoc had the people of state not displayed the exceptional courage and sensitivity towards one-another. The government machinery acts at its own pace but people rose to the occasion. Thanks to education; people in the state have a higher social consciousness to support each other, rising above vested interests.

But why did we let it happen? Why did we not pay any heed to the warning given by the noted ecologist, Madhav Gadgil who headed the Western Ghats Ecology Expert Panel set up by the Government? The panel in its 2011 report had proposed that an ecological crisis had been impending and several areas in Kerala that fall under Western Ghats be classified as ecologically sensitive. The panel had advocated stringent curbs on mining and quarrying and on use of land for non-forest purposes. Gadgil had reportedly indicated that brazen exploitation of natural resources in Western Ghats is purely driven by the greed for infinite profits.

Even the international Community has evinced concerns over the environmental degradation by rich an its consequences faced by the poor. The United Nations Secretary General Antonio Gutters at the launch of the 2018 New Climate Economy Report on 5th September cited the devastating floods in Kerala as a call of the nature to prevent climate change.

He was quoted in media reports saying, “Climate change is running faster than we are. The impacts are devastating and it is usually the poorest and the most vulnerable who are hit first and worst by storms, floods, draughts, wildfires and rising sea”. Natural disasters are unforeseen; even though we are not prepared we need plenty of money rehabilitation and reconstruction at the same time invest time and energy. The environmentalists rightly say that the loss due to environmental degradation is not quantifiable because not only one but many generations of mankind have to pay the price for this.

The laxity on the part of government departments, as no preliminary tests were conducted to examine the impact of opening and closing of dam shutters on the state rivers, took a toll on the lives and livelihood of so many innocent people. As per the reports, 35 out of 54 dams were opened for the first time that submerged vast areas and spelled doom on the lives of large number of people. Financial and material help is pouring in for the victims from all corners but the injury and loss inflicted on the lives of people is irreparable and the painful memories of the deluge will remain seared into the memories for long time. 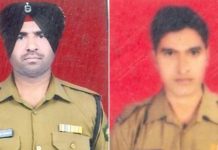