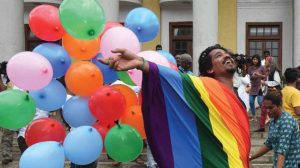 From subsistence to defensive existence, the queer identity in India has devolved with the passage of time. The Indian LGBTQ community is perhaps as old as the history of the country itself. And yet a draconian law drafted by our erstwhile British colonisers, in 1860, usurped their identity and freedom till now. In a landmark judgement delivered on September 6th, 2018, the Indian Supreme Court in the case of Navtej Singh Johar and Others v. the Union of India has ruled that the part of Section 377 of the Indian Penal Code (IPC), which criminalises homosexuality, is unconstitutional. The Indian Supreme Court, in this case, did not merely strike down a piece of bad archaic law but delivered a judgement which is overwhelming in its reach. Team Tehelka applauds and celebrates this decision, which is the culmination of a long struggle waged by the activists as well as the oppressed, through time and political transitions.

Contrary to popular perception, Section 377 earlier criminalised any sexual encounter ‘against the order of nature’, thus making all sexual acts, except vaginal intercourse, illegal. The fact that this brought the entire LGBTQ community under vigilance, against a fraction of a majority heteronormative community, has not only made their official existence illegal for more than a century but also shaped a biased society along the way. Individual freedom and privacy are constitutional rights that section 377 infringed upon. The Hon’ble Supreme Court of India recognised the fact in its present ruling. The judgement is more than 500 pages long, comprising of four separate judgements written by the five-judge bench of the Supreme Court – Chief Justice Deepak Misra and Justices A.M. Khanwilkar, Rohinton Nariman, Dhananjaya Chandrachud and Indu Malhotra

The ruling explores issues of gender identity, sexuality and sexual orientation. It relies on biology and science as much as all that which makes us human, to arrive at its conclusion. It relies on judicial precedents from India and across the world. It traces the colonial history of this law and looks to a future in which we can leave these unjust and violent pasts behind. It dispels any notion that decries homosexuality being against the order of nature. Justice Chandrachud quoted from an article he read which said that homosexual behaviour existed in all species except those that “never have sex at all, such as sea urchins and aphis.” Chief Justice of India Dipak Misra also wrote, “What nature gives is natural. That is called nature within.” A number of other cases in the High Court of Delhi and the Supreme Court, such as the Naz Foundation case and the National Legal Services Authority v. Union of India, serve as critical markers in this journey.

India is one of the few countries where history celebrates its diversity as well as its love stories. From Khajuraho to the Hijras, we can see symbols of free love everywhere. Though traditional religious literary sources do not speak of homosexuality directly, the Indian history and mythology are replete with references of changes of sex, homoerotic encounters, and intersex or third gender characters often found both in traditional religious narratives as well as in regional folklore. But a law created by a willful king (Henry VIII) but long abolished in the country of its origin, paved the way for a homophobic Indian society as we see today. Though there may not have been many incarcerations over more the 150 years that have passed since an entire community was subjugated to a secret life filled with fear and discrimination.

As Sonia (name changed), a 27-year old software engineer from Bangalore puts it, “During a job interview two years ago, I was asked if I had plans of getting married soon. When I replied that I never planned to, they asked me the reason for it. Once I replied that I did not dig boys, the room fell silent. That’s when I knew the interview was over and I wasn’t getting the job. They never called back. Since then I am very careful about not disclosing my lesbian identity in my workspace. Even my friends, who are from the same industry, don’t know my truth. I sometimes felt claustrophobic in their company. Though the change in the attitude of the society wil take time, I now feel hopeful that day is near after this judgement.” On the other hand, Josey (name changed) from Bhubaneshwar reveals,” A few years ago, a cop who was an acquaintance, blackmailed me for months to out me as a gay man if I did not pay him. The experience scarred me for life. I am so happy the law is on my side now.”

Only a member of the Indian LGBTQ community can understand the sense of independence to love and live, that the rest of us have always taken for granted. The principal petitioner Navtej Johar and his partner Sunil Mehra have been a couple for 24 years under the shadow of India’s archaic law on homosexuality. Mehra, 63, is a well-known journalist (the former editor of the Indian edition of Maxim magazine), while donning many other hats. Johar, 59, travels the world as an award-winning Bharatanatyam dancer, choreographer and yoga teacher. They were a private couple who chose to put their name on a writ petition to abolish section 377. Their petition was accompanied by a clutch of other gay and lesbian personalities who had previously been equall private about their sexuality. They came out in the open about their choices and beliefs, just to give a human face to the long running battle to love freely.

The movement to repeal Section 377 was initiated by AIDS Bhedbhav Virodhi Andolan in 1991. On 24 August 2017, the Supreme Court upheld the right to privacy as a fundamental right under the Constitution in the landmark Puttuswamy judgement. The Court also called for equality and condemned discrimination,stated that the protection of sexual orientation lies at the core of the fundamental rights and that th rights of the LGBT population are real and founded on constitutional doctrine. This judgement was believed to imply the unconstitutionality of section 377.

The road to true inclusiveness is still long and bumpy. This is just the beginning. The LGBTQ community can claim their rights and their love, knowing the law of the land is on their side. But we, as a society, still need to let go of our biases and support our own in this journey. The government and public needs to come together in their efforts to sensitise the young and the old, the rural or the misinformed, about the need for acceptance of our gay brothers and sisters. Let us come together and paint the sky in rainbow colours for Indian society free of prejudice and full of love.