Jammu and Kashmir Lieutenant Governor, Manoj Sinha has invited heads of all political parties of Jammu and Kashmir for a high-tea at Raj Bhawan in the evening today for discussions on the smooth conduct of Amarnath Yatra, which is commencing on June 30 and other issues.

The LG Sinha, a local news agency said,  sent invitations to all political parties of the union territory for a meeting at 6 pm.  Sinha was in Jammu to flag off the first batch of Amarnath Yatra pilgrims from Jammu base camp toward the cave shrine in Kashmir today morning.

Amarnath Yatra is being held after a gap of two years. The pilgrimage was suspended following Covid-19 pandemic which prohibited large gatherings. 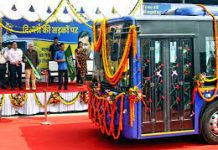