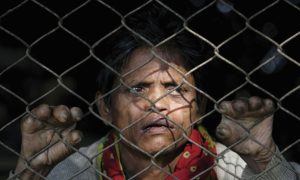 Niharika was living happily with her husband Prashant Palande in Hosur village of Latur district in Maharashtra. All went well for six years. Then she was diagnosed with leprosy. As soon as the disease was confirmed, Prashant didn’t want to stay with her and sent Niharika back to her brother’s house. His family was also not keen to keep her in their Kalachowki home. Niharika was first admitted to a temporary destitute home in Dahisar and from there she was taken to Vehloli village.

She is not the only victim of the stigma attached with the disease and legal loopholes that act as a ground for divorce, separation and annulment of marriage if leprosy hits a person. More than 52 per cent of the world’s leprosy patients, according to Attorney-General KK Venugopal, live in India, with over 1.24 lakh people added to the list every year. While the good news is that the disease is completely curable, the social stigma attached to it continues to make lives miserable for the patients.

The worst part is that colonial laws that predate leprosy eradication programmes and medical advancements still remain on the statute book even after more than seven decades of Independence of the country. These were unconscionably discriminatory from the beginning. The process of removing these legislations has been extremely slow. The Lepers Act of 1898 was repealed only two years ago.

Two recent developments may make things a bit better for the leprosy patients. One was the introduction of a Bill in Parliament to remove the illness as a ground for seeking divorce or legal separation from one’s spouse. Second was a query by the Supreme Court, asking the Centre whether it would bring in a positive law conferring rights and benefits on persons with leprosy and deeming as repealed all Acts and rules that perpetuated the stigma associated with it.

Additional Solicitor General Pinky Anand, in response, informed the apex court’s bench headed by Chief Justice Dipak Misra that the process for drafting the law to repeal all the discriminatory provisions was underway and the government needed four months to complete it. The submissions were made while the court was hearing a PIL by a Delhi-based think-tank Vidhi Centre for Legal Policy praying to repeal 119 laws that allegedly discriminate against people suffering from leprosy. The PIL had alleged that outdated provisions denied them access to public services, impose disqualifications on them under personal laws and prohibited them from occupying or standing for public posts or office.

Leprosy patients, according to medical experts, are no longer contagious after about a week of multi-drug therapy. Nearly 95 per cent people have enough immunity against the disease anyway. Further, the disease can be completely cured within six months to a year with a combination of three antibiotics. In July, the court had passed a slew of directions asking the Health Department of the Centre, states and UTs to carry out awareness campaign at the grassroots level to put an end to discrimination against persons suffering from leprosy.

If approved, the Personal Laws (Amendment) Bill, 2018, may mark the beginning of the end to the culture of ostracisation that most of the leprosy patients face and help remove misconceptions about the disease and dispel the belief that physical segregation of patients is necessary. It is sad that it took so long to get such proposals on the legislative agenda. But then, better late than never. Efforts on legal front is fine but the society too need to play an active role in ending prejudice against people like Niharika and help them live a normal life.