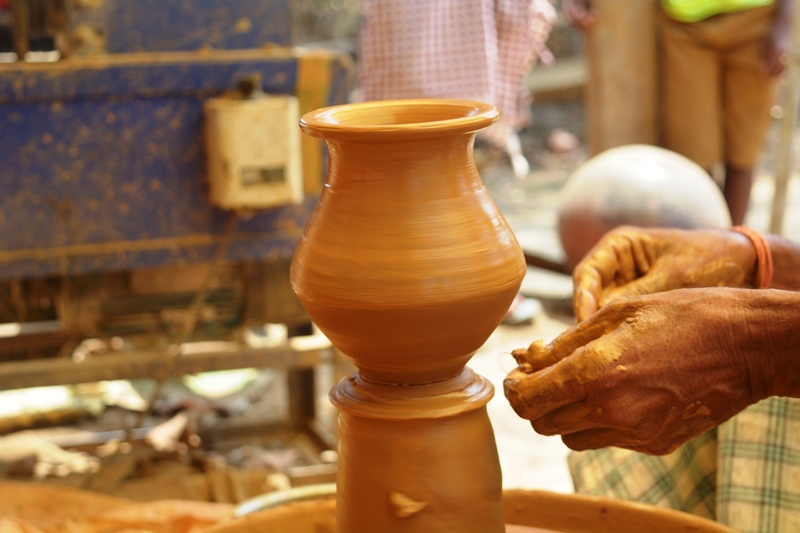 The state government has stepped in to help the Kumhar community of Dantewada district in Chhattisgarh by giving them access to new machinery, work space and training, writes Deepanwita Gita Niyogi

Kumharras is a unique place. Here, clay pots are found lying all around. Some are even haphazardly stacked in dingy corners. In this village in Dantewada district of Chhattisgarh, there are 100 houses which belong to the potter community known as Kumhar.

Elderly Budhram Sori, a seasoned potter who picked up the pottery-making skills from his father and grandfather, came out of the house smiling. Sori creates many items, ranging from water containers to diyas (traditional lamps). The potter sells his products in nearby rural markets. About 20,000 diyas and kalash or water vessels are needed in temples on a daily basis.

To reduce the labour of Sori and other potters like him, the state government has stepped in. Many potters in the village now use the potter’s wheel which runs on electricity instead of the traditional cumbersome wheels which are bulky. The former ensures less effort, and is labour as well as time saving.

Besides the innovation in the wheel, a building to be used as a workshop by potters of Kumharras just a few metres away from the village, is also nearing completion. This will help store many finished products, thus solving the problem of space crunch at individual homes. As many as 100 families will benefit from the new place where potters can sit together and make products.

In the midst of conversation on a hot noon, Sori’s agile fingers lightly pressed a traditional lamp to mould it into perfect shape on the electric potter’s wheel. The work needs skill and patience as the wet diya may easily break if not handled properly. The trick is to ensure that the hand remains soft and not much pressure is applied to maintain the desired shape.

“My father and grandfather have done the same thing. But whereas they worked using traditional wheels, the electric wheel is easy to work on,” the potter said. Sori is adept at making small clay items within a few minutes, and mostly prefers, to work half bent rather than seated. All the items in the village are made of red-coloured mud which is excavated from a nearby site.

The potter showed off his skill at the conventional wheel even though he admitted that more potters prefer the electric machine nowadays. The large wheels can injure legs but are still used to make big items like water containers.

It takes an hour to dry the products. After that they are baked in the traditional brick kiln once a week. Some products also take two to three days for drying. “We have to keep them in the shade or else direct sunlight produces cracks,” Sori added.

Apart from pottery, which fetches Rs 6000-7000 a month, potters in Kumharras own lands for paddy, the dominant crop of Chhattisgarh mostly sown in the kharif season.

A few potters admitted that the money earned by the community is low. To keep things going, collective help is desirable. While some bring mud, others work on wheels. It takes about five minutes to make medium-sized products.

Apart from the electric machine, the upcoming building will benefit potters of Kumharras. For this, the initial budget stands at Rs 1 crore. Madhusudan Kumkar, a member of the Kumhar Samaj from Kumharras, said meetings are organised every month to discuss and address issues. He hoped that the construction work of the building would be completed in a short time.

To help potters in Dantewada, a tender worth Rs 67 lakh has been floated for machinery. “Training is being given to potters through the Matikala board which is also trying to spread awareness and carry out design development programmes under the guidance of AK Gupta, a ceramics consultant and expert from Kanpur,” said HN Murthy, an officer at the board.

The Matikala Board based in Raipur takes care of potters across Chhattisgarh. Working units for the community are already present in Mahasamund, Surajpur and Dhamtari districts of the state. Apart from the building coming up in Dantewada where machines would be provided, another is in the offing in Durg district.

Sudhakar Khalkho, the managing director of Matikala Board, explained that red clay pottery is traditionally made in Chhattisgarh. But a shift should be made towards white clay which has more market value. “The potters have been making conventional designs but the board wants to change the system by giving them training to help make new things like coffee mugs, flower vases and decorative pieces.”

According to pottery expert Gupta, a major problem faced by potters in Chhattisgarh is the lack of modern furnaces. The traditional kilns need to be upgraded. Potters also handle far less amount of clay. A potter in Chhattisgarh uses about 200 kg of mud per day which is less compared to other places. Sometimes, they lack access to good quality and adequate quantity of mud.