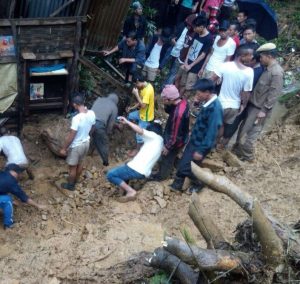 Nine persons including children were killed in landslides at three different places caused by continuous rainfall in Manipur’s Tamenglong district on Wednesday.

According to District Commissioner Rabinder Singh, bodies of seven people have been recovered, while security personnel and locals are carrying out rescue operations for the remaining two.

Manipur Chief Minister N Biren Singh in a tweet said, “I am deeply saddened to know that Nine precious life lost due to land slide at 3 places in Tamenglong Head Quarter, till now 7 bodies have been recovered 2 bodies of children yet to recovered. Rescue operations is on.”

“A ministerial team led by shri K.Shyam (CAF & PD) and Shri Th. Radheshyam min (Edn) along with R/DM team left Imphal at 11 AM for Tamenglong to help the victims,” CM Biren tweeted.