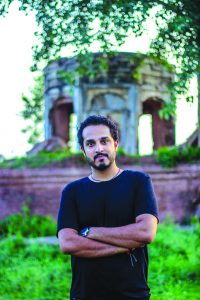 Lahore is a trip down the city’s multi-cultural pre-partition past? What inspired you to embark on this journey?

It was this paradoxical relationship that the city today has with its multi-cultural past. Lahore today is a monolithic city and there is no public discourse about its diverse past. However scattered all around the city are traces of this history — abandoned temples, gurdwaras, havelis. Sometimes this heritage also survives in terms of its names. There are still localities in the city that are called Krishan Nagar or Laxmi chowk, despite the homogenous façade of the city. It is these hidden aspects of the city that I wanted to explore and discover.

You write Lahore of today is not comfortable with its Hindu and Sikh past but the past keeps projecting into the present?

Yes. No city or people can erase its past. In many ways these stories and the past survive in the forms of structures or names I have mentioned above, but sometimes it also exists in terms of stories and narratives. Every nook and corner of the city has a story to tell. These stories even though not acknowledged officially, continue to form a part of the folklore and its oral narrative. For example even today one gets to hear from the older residents of the city about what the city was like at the time of Ranjit Singh or the ‘Hindus’.

Lahore continued to be the cultural capital of Pakistan for several decades after partition. What is the situation like now. How is the city shaping up
to be?

It is not just Lahore but the entire country’s culture has suffered immensely in the past few decades. The legacy of the Islamization of Zia-ul-Haq still continues to cast a shadow on the cultural life of the city and the country. For example seeds of destruction for the film industry of Pakistan were sown in these years and one saw towards the end of the 1990s and beginnings of 2000s, the death of the Lahore based film industry. There has been a recent revival in the movie industry but that has been more Karachi centric. Another major blow to culture came in the form of the deteriorating law and order situation. Major music and other cultural festivals in the country came under threat, thus reducing their frequency. Even the literary culture that once boasted of stalwarts such as Faiz and Manto, slowly began to fade away.

What was the pre-partition demography of Lahore like? And how many non-Muslims live in the city now?

Lahore being the largest city in a newly created state became the hub of religious parties, which mind you, were not necessarily in favor of the creation of country. Lahore was at the vanguard of 1953 anti-Ahmadiyya riots which in many ways paved way for the religious parties’ future course of action. Many of these religious parties still have a strong street presence in the city and there are thousands of graffiti around Lahore to highlight this, but none of these parties have any electoral presence. Thus in a way due to their street nuisance power their voice ends up being louder than their due.

What does the rise of Imran Khan’s PTI as the dominant political force mean for Lahore. Will anything change?

The rise of Imran Khan’s PTI in fact reinforces the central hegemonic role the city hold on the politics of the country. It is Lahore that ushered Imran Khan to centre stage. His jalsa in the city in October 2011 is what led to many sitting up and taking notice. Lahore has also been the centre of power for Nawaz Sharif’s PML-N, and also the home of Imran Khan, thus the city became the miniature of the larger political tussle between these two parties. However whereas in the past Nawaz Sharif’s PML-N invested heavily on the infrastructure of the city, I think Imran Khan might not do the same given that he has always been critical of PML-N’s Lahore centric view of Punjab and Pakistan.