What actually happened at the Line of Actual Control in Galwan valley wherein 20 of our soldiers were martyred still remains murky. There are conflicting reports whether no intruder was present on the Indian side, and whether the Indian soldiers in the fatal encounter were armed or unarmed. To add to the confusion, soon thereafter came the news about the release of 10 soldiers including officers by the People’s Liberation Army of China. It had not been clarified that these brave men were missing since the June 15 incident.  Also it was not made known that negotiations were going on for their safe return for the past three days. It points to lack of transparency about the sequence of events which only added to misinformation and speculation.   No doubt that sharing every detail with the media or public may not be possible when it comes to national security but complete secrecy serves no good purpose.
The nation has to realize the designs and ambitions of an aggressive China at a time when the economy is in bad shape and Covid-19 is spreading rapidly. China has for long been blocking India at international foras and backing Pakistan against India. China feels confident that it can take confrontation with any major power solitarily or simultaneously. For India it is necessary to use strategic, military and diplomatic methods. Also India needs to resolve lingering issues with neighbours Pakistan, Bangladesh and Nepal.
This is not the time for political one-upmanship or to create a political storm after the all-party meeting called by the Prime Minister, Narendra Modi which the PMO described as a “mischievous interpretation”.   Former Prime Minister, Dr. Manmohan Singh said, “disinformation is no substitute for diplomacy” and went on to point out “China is brazenly and illegally seeking to claim parts of Indian territory such as Galwan valley and the Pangong Tso lake by multiple incursions between April 2020 till date”. This led BJP President, JP Nadda to say, “former PM had abjectly surrendered hundreds of square kilometers of land to China and presided over 600 incursions during 2010 to 2013 while his party helplessly surrendered 43,000 kms of Indian territory to Chinese”.
It must be welcomed that the Prime Minister assured the meeting of 20 major political parties that no Indian territory has been encroached by China and that Indian soldiers are patrolling the LAC that separates China from India and there is better infrastructure on the
Indian side along the border. The all-party meeting was a step in the right direction but confusing statements only confounded the magnitude of the grave issue and laid bare the dilemma of the government like the Shakespearan “to be or not to be”! 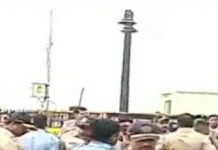