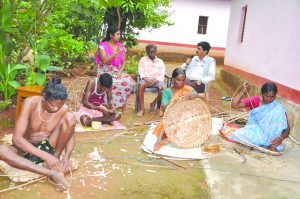 The Koragas, who live in Karnataka’s Dakshin Kannada and Udupi districts and neighbouring Kerala’s Kasargod district, are a living example of the country’s rigid caste discrimination. The elite society doesn’t even consider the Particularly Vulnerable Tribal Group (PVTG) as human beings, forget about their human rights.

For several decades, the Koragas are silently tolerating the inhuman torture as they haven’t mustered courage to speak against the social stigma or free themselves from the shackles of “slavery”. Here, the lethal mix of regressive tradition and superstition continue to subjugate rationality while the Koragas rot in the hell hole called society. Their pain and sufferings continues.

More than seven decades have been passed since India achieved freedom from the British but the country has failed to end atrocities committed against the schedule tribes on ground zero. The Koragas continue to be oppressed and discriminated in villages, schools and they are left with little scope to pursue their dreams. It is a matter of pity that the basic tenets promised in the Preamble of the Constitution isn’t clearly visible on the ground. Though, several legislations have been made by the government from time to time, their voices continue to be stifled.

It is a matter of shame that upper-caste Kannadigas use the services of Koragas for the Ajalu practice in this 21st century. Despite the implementation of the Karnataka Koragas (Prohibition of Ajalu Practice) Act, 2000, the Koragas are treated as inferior human beings and forced to eat leftover food mixed with hair, nails or any other inedible or obnoxious substance. Their plight doesn’t end there. Before the beginning of Kambala (buffalo race in marshy land), Koragas are asked to run like buffaloes. Apart from the inhuman Ajalu practice, the Koragas’ fight against malnutrition, tuberculosis, high mortality rate, illiteracy, and others problems is still on.

Neither the Koraga tribe, nor their language (also known as Koraga) have got due representation in their native place Karnataka, let alone India. In 2011, as many as 15,000 (approx) out of 23 lakh people in Dakshin Kannada and Udupi districts of Karnataka were speaking the language which was described as a “secret Dravidian language of Madras” by Irish administrator and linguist in British India George Abraham Grierson. Grierson also said that Koraga could be a dialect of Tulu.

Lotus grows in the mud

In the true sense, Sabitha can be compared to the lotus that takes root in the mud, but blooms above the surface of mud and water. Despite all odds, and the social stigma Sabitha completed her M A degree and became the assistant professor in the department of sociology in Mangalore University in 2013. She became the first woman from her community who broke the glass ceiling. Jeetha is another brilliant student from the community who by virtue of her own merit got admission into the prestigious Mangalore University.

The Korga population is shrinking alarmingly due to the lack of proper health care facility and other basic requirements, According to the 1981 census, more than 15,000 people were entitled as Koragas but in 2011, the number fell down to 14,000. This downward trend in their population narrates the sorry state of affairs about the community.

During the darkest days of their life, several non-government organisations have come forward to work for the development of the tribe. As a result, scores of bright students from the community are trying to script their own success story, said Nandini, Regional Manager, ActionAid India (Karnataka). Nandini believes the community has achieved significant progress in several fields but they also need the support of the government to address several
issues that are still pending.

ActionAid India, which has started several projects across the country, is also working with the Koragas and nine other tribal communities in Karnataka to help them gain access to government schemes meant for them.

According to the Restoration of Dignity and Human Rights of Indigenous Tribal Community project, ActionAid and the Koraga Federation and Samagra Grameena Ashrama have jointly secured thousands of acres of land for the community. As per scheme, around 19,000 people have accessed grants to build homes  for them — the first step in the direction of ensuring home for every Korga family.

Gowri, who used to work as a labourer in the houses of upper caste people said the efforts will support and ensure every Koraga claims their right to land and will be treated as human beings like others. “Since decades, we were considered as worst humans. Now, after acquiring land for building a house, my family and others will be able live a dignified life”, said Gowri, mother of four.

“The community has faced discrimination, untouchability and bondage situations in every walk of its life. Now a new project will help them live their future life in a well maintained environment”, said Sandeep Chachra, Executive Director, ActionAid Association India.

This year ActionAid’s India’s Restoration of Dignity and Human Rights of Indigenous Tribal Community in Karnataka project in partnership with the Koraga Federation and Samagra Grameena Ashrama has also been declared as the winner of World Habitat Awards Gold Winner 2019. The award was conferred by the World Habitat, a UK based organisation, in partnership with United Nations-Habitat.

“This recognition for the courageous and sustained efforts of the Koraga community would send a message of hope and optimism to other communities across the world in their struggle for a life of dignity and sustainability,” Sandeep added.