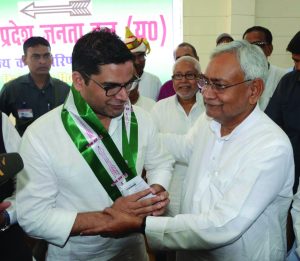 He was behind major populist campaigns of the BJP and social media management, which set the tone in unprecedented way and made Modi, a protagonist of new political culture in India. As a founder of Citizens for Accountable Governance, Kishor was instrumental in mobilising a group of young professionals from elite institutions, for providing a solid traction to the BJP in creating an interface of marketing-social media with its aggressive brand of politics.

Prior to that, in his first association with the BJP, he structured the campaign for the 2012 Gujarat Assembly Elections and made it possible for Modi to become Chief Minister for the third time. However, in no time, he realised and admitted that his job is thankless. Still, he didn’t think to come out of back room business and continue to support his political clients ‘doing politics differently’.

After 2014 parliamentary elections, Modi’s new position suitably placed him at front foot, leaving no reason to play from back foot. Thus, little disillusioned, Kishor switched to other camp, Indian National Congress. A professional move that didn’t work out as unlike the previous assignment with BJP, here he had counterparts in party who were ‘thinking’ and ‘opinionated’. Even at loss after 2014 Parliamentary Elections, the old guards of Congress didn’t give up to the wave of ‘right wing populism’ and offered not much enthusiasm for Kishor’s way of political planning and management. But for sure, during his brief stint with INC, he made an exception with Captain Amarinder Singh who won Punjab State Assemble Elections in testing time of his party.

Back home, in Bihar, he spotted a fair chance that was too good in supporting JD (U)-RJD alliance and stopping the juggernaut of New BJP, led by Narendra Modi, former RSS Pracharak & Serving Prime Minister of India. He succeeded in playing his bit during the State Assembly Elections in Bihar in 2015, and as expected with the victory of Mahagathbandhan, came in bigger frame of Bihar politics. As a thinking person, he was ideally a future leader with fresh ideas and plans.

Sadly, JD (U) top brass including Bihar Chief Minister Nitish Kumar were yet not open to reckon that the party needs second generation leadership and for competing and taking it further on Bihar’s tough political battleground. Kishor kept on going till Nitish Kumar made a most surprising decision to end his party’s alliance with RJD and decided to return back to NDA fold, the former suggested for seeking fresh mandate. A suggestion that was very judicious and pragmatic, ignored by Nitish Kumar, forced JD (U) National Vice President Prashant Kishor lying low in the party.

However, as per the claims made by Lalu Yadav in his recently released autobiography, <Gopalganj to Raisina – My Political Journey>, Nitish Kumar repented in his decision within six months of alliance with BJP. He put on job Prashant Kishor to negotiate for re-alliance with RJD and later merging his party in Congress with a condition of getting PM Nominee berth for himself. On this, many other prominent leaders including Tejaswi Yadav and Rabri Devi have voiced. Possibly, as it didn’t work out, Kishor played safer and refuted it. He remained in party-fold, the JD (U) was back to the grip of survivors.

The old cadres in JD (U) who were not so comfortable with Prashant Kishor’s ‘rise and rise’, opted to play ‘loyalty card’ and secured their turfs. Reportedly, Prashant Kishor is unlikely to campaign for the JD (U) in the early part of Parliamentary Elections because of ‘prescheduled professional commitments’ given to YSRCP leaders Jagam Mohan Reddy and Shiv Sena. Reportedly, he has also told the party that he will not be available for the full campaign in Bihar while the JD (U) has kept Kishor in its list of 4-star campaigners.

One of Kishor’s tweets makes the cold feel well, “The NDA in Bihar has been contesting election with full strength under the leadership of PM Modi and Bihar CM Nitish Kumar. The responsibility of election campaign and management from the JD (U) rests on the strong shoulders of the party’s senior and experienced leader R C P Singh. My responsibility in the early phase of my political innings is to learn and cooperate.”

It appears clear that Prashant Kishor is not finding enough elbow room for his political ideas, although he is still in action but his adversaries are counting on the ‘real power’ which is not backing up his high-profile induction in party. While he was seen by many as political successor of Nitish Kumar, Nitish himself attributed his induction into the party majorly influenced by the BJP National President Amit Shah’s insistence in Kishor’s favour. Noticeably, Nitish was once wary of any public recognition with his association with Modi-Shah duo!

In an interview on 11 November 2018, Kishor made it point as a pragmatic thinker. Without undermining Nitish Kumar’s position in Bihar politics, he praised Lalu Yadav and suggested dispute resolution on Ayodhya through Supreme Court verdict instead any kind of political activism. Strikingly, he voiced it too, “Modi is a big leader, but generating 2014-style hype again is hard.”

If not having a compulsion or zest for keeping ‘selective memory’, this is quite a statement of permanent relevance. This comes from the architect of campaign that resulted favourable gain for Modi in 2014, and disillusioned with ‘politics of hype’, he sums up the changed ‘realpolitik’ of India.

A public health professional who served UN for years, Prashant Kishor was and is a remarkable political entrant in Indian politics. By believing in beauty of delegation, Nitish Kumar could have set a positive precedent by fielding Kishor at right place. His marginalization for petty motives of few old guards in JD (U) is glaring example of party’s undemocratic working culture.

The state is in need of positive political interventions, but JD (U) leadership is now relying on ‘lexicon and grammar of politics’ which are alien to the progressive ideas and action. Prashant Kishor’s marginalization is pitiful but hardly shocking since ‘politics of hype’ augurs well for few only. Of late, he was and is a profession. An existence that can be ignored and forgotten!

Beyond how politics went good, bad and worse at Nitish Kumar’s end, the history will be also not kinder to him for letting down the moral-social construct by not acting hard on dirty souls who acted badly in Muzaffarpur shelter case and series of other unfortunate incidents in Bihar’s recent past. Before falling down further, he must recall the differently lived better times and admit his failure in changing Bihar’s political, social and economic fundamentals beyond tokenism and think for course-correction.

His new political partners can think well of them, they can’t think the same way for well-being of Nitish Kumar whose political DNA is still different. To stop the decay of Bihar’s political tradition, he should give a chance to his inner call that hopefully would be saner than his political decisions taken of late!

Atul K Thakur is a New Delhi-based writer with special interest in South Asian affairs. Views expressed are his own.