A Kiran Mk-II trainee aircraft of the Indian Air Force (IAF) that took off from the Hakimpet Air Force station, Hyderabad, crashed on the agricultural fields near Yadadri Bhuvanagiri District of Telangana on November 28.

IAF PRO Anupam Banerjee said that the aircraft took off from Hakimpet Air Force station on a routine training mission around 1145hrs, crashing shortly after.

The trainee pilot who ejected before the crash is identified as Yogesh of Uttar Pradesh. He has sustained injuries and has been shifted to hospital.

The trainee aircraft was on a routine training mission and cause of the accident has not yet been ascertained.

A court of inquiry has been constituted to probe the cause.

On November 21, in a similar incident, a trainee aircraft crashed in the fields of Shankarpalli block of Telangana’s Rangareddy District. 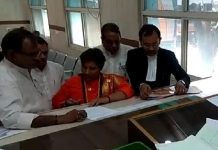