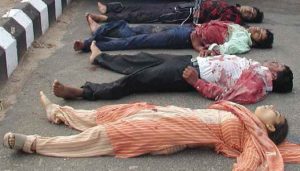 What are encounter killings? What are the so-called encounter specialists up to? What is the role of the State in killing its own citizens? What is the State trying to achieve, bypassing the traditional ways to settle crime and the so labelled criminals? What havoc is this new form of State terror tactics heaping on masses of the country, who are anyway surviving amidst tough and challenging circumstances?

Till about few years ago, the term encounter killings seemed reserved only for those living in the so -called conflict zones of the country or for those fitted in the underworld, but today the State seems to have adopted this strategy to liquidate just about any rival coming in its way. Victims could range from political opponents to personal enemies to those who are not part and parcel of the very nexus controlling the very system.

I have been going through the long list of recent encounters and also of those lying dead or injured or captured in those targeted killings. The largest number of encounters have been reported from the State of Uttar Pradesh in the last one year. Quoting these figures from the PUCL’s very recent findings on encounters taking place in Uttar Pradesh: Since March 2017, 49 people have been killed in over 1,100 encounters. More than 370 have been injured and over 3,300 arrested across the state.

And though activists have been crying hoarse, labelling a majority of these encounters to be fake and undertaken by vested political interests to eliminate rivals and opponents, but the actual culprit cops have not ever publicly spat out against the political might, at whose commands and orders these encounters are undertaken. With this in the background or foreground, I was more than surprised to read cop RB Sreekumar’s volume — Gujarat :Behind The Curtain — (English edition published by Manas, and its Hindi, Urdu, Gujrati editions published by Pharos Media) where this whistle-blower top cop of the Gujarat cadre writes rather too candidly about the nexus that works between the partners in crime — cops, the politician and the bureaucracy.

Space constraints come in way of my detailing the alleged proximity of the former encounter-specialist of Gujarat, DG Vanzara, with the top political brass of the Gujarat … Perhaps, DG Vanzara’s resignation letter published in Kumar’s volume speaks volumes , “DIG DG Vanzara, jailed since April 2007 for the alleged guilt of committing fake encounters ,in his resignation letter to the government of Gujarat, dated September 1, 2013, captioned — ‘Tendering of resignation from my service with renunciation of all post- retirement benefits’ wrote ‘Gujarat CID / Union CBI had arrested me and my officers in different encounter cases, holding us to be responsible for carrying out alleged fake encounters, if that is true then the CBI investigating officers of all the four encounter cases of Sohrabuddin, Tulsi Ram, Sadiq Jamal and Ishrat Jahan have to arrest the policy formulators also, as we, being field officers have simply implemented the conscious policy of this government, which was inspiring, guiding and monitoring our actions from very close quarters. By this reasoning, I am of the firm opinion that the place of this government, instead of being in Gandhinagar, should either be in Taloja Central Prison at Navi Mumbai or in the Sabarmati Central Jail in Ahmedabad.’”

Have we ever paused to think on what happens to the families of those killed or captured or injured in the various encounters. They are ruined on any given front, with social and economic offshoots hitting them to such an extent that they find basic surviving to be near impossible. Of late, I have been reading news reports, where hapless families of those killed in the Uttar Pradesh encounters have said that their men have been framed and done away with, and they have little means and nil resources to seek justice. They have little choice but to carry on with the tainted image inflicted on them.

This brings me to write that few years after 19-year-old student Ishrat Jahan’s killing in that much-hyped encounter, on an empty stretch of road between Ahmedabad and Gandhinagar in Gujarat, by the officers of the Ahmedabad Police Crime Branch led by DG Vanzara, I had interviewed her mother, Shamima Begum, and also her younger sister, Musarrat Jahan. It gets difficult to describe the trauma they were facing. To quote Musarrat, “It was such a blow on all possible fronts; emotionally, socially, financially.  Ever since Ishrat was murdered, we have just kept to ourselves and seldom move out, we have become wary of stepping out and meeting even the neighbourhood people. Our studies got disrupted. It was difficult to even survive, forget about books and studies. I sat blank, in a trance-like condition. I gave up studies, stopped going out, and didn’t meet even any of our relatives. Even financially our situation worsened. After our father had died in 2002 because of brain tumour, the entire responsibility of the family fell on the eldest of the seven sibling, Ishrat Jahan. She had begun taking up part- time jobs and tuitions together with her college level studies, to keep the home fires burning. But with her killing we are ruined … toot se gai hain … we want justice for my sister. After all, that encounter in which my sister was gunned down was staged for political gains. It was a well concocted false charge that my sister had gone to kill Chief Minister Narendra Modi, and so they had her killed in that encounter.”

Musarrat Jahan had repeatedly said that though they are ruined and devastated but determined to get justice. “For us it is a fight for ‘insaaf’, to remove the terrorist tag thrown at my innocent sister, at us, at my entire family. You cannot imagine how difficult it’s been for us to survive.”

They were fortunate enough to have had the well-known lawyer, Vrinda Grover, fight their case. In fact, Grover had then told me that she had decided to take up this case of slain Ishrat Jahan because, “It was the conviction of the mother and family in Ishrat’s innocence and their determination to have her name cleared that persuaded me. They want their respect and dignity restored.” Till date I haven’t read a full- fledged volume on the rising number of encounters taking place in today’s so- called developed India, but in one of the volumes written by a former jailed inmate there is a detailed description of his near -death in an encounter.

I Am A Mufti & I Am Not A Terrorist -11 Years Behind the Bars — written by Mufti Abdul Qayyum Husain Mansuri carries not just details of the torture inflicted on him after he was “kidnapped” by Gujarat Crime Branch and then implicated in the Akshardham case, but much more…Imprisoned for 11 long years till acquitted by the Supreme Court of India; one of the first things he did was to write this book, carrying not just details of his prison years but also of the one encounter he faced.

To quote from this book: “It was the cold night of Thursday, 18 September 2003. I was sleeping in Vanaar’s office in such position/condition that one of my hands was cliffed and locked with the table. I was asleep with great difficulty when one of the officers awakened me by kicking me on my back with his shoes. Singhal was standing in front of me and the best kind of Awadh’s fragrance was witting from his clothes. Behind Singhal one face was seen. He was V.D. Vanaar. On Singhal’s order, the hand cliff was unlocked from my hand. V.D. Vanaar took me along and said, ‘come on, its Sahab’s order today your encounter has to be done. I was told you offer namaaz/salat for dead persons, today offer namaaz for yourself. I was pushed to sit in a Tata Sumo [car]…After misfiring on me on one or two places, Vanaar asked for the revolver from P.S.I., R.I. Patel and after directing the vehicle (Tata Sumo) on two, three roads, told the driver to take it near the canal. On the way, Vanaar also narrated the legend of his mastery in encounters and the allotment of medals from the government. He said: See I have killed Hameed Lala. I have killed Ranapwala here on the stairs of the crime branch, and he counted some more names and said even after so many encounters what harm the government and the court done to me. On the contrary, I was given bravery medal of ‘Puraskar’ and 51,000 as an award. Today this encounter of yours is the sixth one. Tomorrow we will give this story to the media and newspapers that are going to investigate the case: on getting chance he ran away, somehow he got a revolver from somewhere and fired on us and on back-firing (from us) he was shot …The vehicle was stopped at one place in the dark night. As per my assumption, it was some place behind the airport, because the lights of the airport were seen from there. On both sides of the road there was the canal….Then they led the vehicle deep inside on the other side of the canal, on the left side and all the braves got down from the vehicle after stopping it at a vast open space and they also got me down by pulling my beard and abusing me…Vanaar took out the revolver and told his companions to move aside a bit after he aimed the revolver on my head …I was standing alive dumb with amazement and was astonished, because the bullet did not strike my head but passed by my head. After that five fires were shot on my right and left side of the head and on the left and right side of my legs ….Until now, Mr. A.A. Chauhan, being a silent audience in this blood-shedding drama, entered the scene. He came forward and said, Vanaar sahab don’t kill him. I want to give him a last chance, after talking to superior officer. Then asked me, turning towards me: if you confess all that the superior office says then I can save your life…”