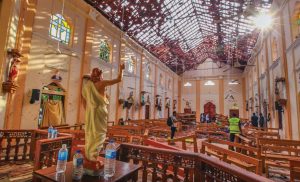 April 28 was the first Sunday anyone could remember without a mass at St Sebastian’s. A week earlier, nine suicide bombers had carried out a series of devastating blasts that tore through three churches and three luxury hotels on the Easter Sunday, killing 253 people. Cardinal Malcolm Ranjith, Sri Lanka’s most senior Catholic, meanwhile had ordered the country’s churches not to hold services until police could be sure they would not be attacked.

The ISIS claimed the attacks, but the government has blamed local Islamist extremist group NTJ for the attacks. Sri Lankan President Maithripala Sirisena has banned two Islamist groups — the National Thowheed Jamath and the Jammiyathul Millathu Ibrahim — six days after serial blasts in the island country. All activities of these organisations will be stopped and their property seized by the government, adaderana.lk reported.

Until April 28, a total of 106 suspects, including a Tamil medium teacher and a school principal, were arrested in Sri Lanka in connection with the Easter Sunday blasts. The Criminal Investigations Department (CID) is carrying out the interrogation of the 106 suspects, Colombo Page reported.

The arrested people include a 40-year-old Tamil medium school teacher who was found in possession of 50 SIM cards and other incriminating items, the report said. He was held following a joint operation conducted by the Kalpitiya Police and the Navy.

In a special joint operation conducted by the Army and police in Vavuniya town, 10 suspects were arrested. On a tip-off, main roads were blocked and search operations carried out for nearly three hours. Security has also been stepped-up in the area.

Meanwhile, two suspects were arrested in Damgedara area in Galle during a search conducted on information received of a school managed by the NTJ. One of the suspects is the principal of the school and the other is a doctor who has served as an instructor. The Galle police are conducting further investigations.

Indian authorities, on their part, had shared “actionable” intelligence with Sri Lanka before the serial blasts rocked the neighbouring country. “Desired and actionable inputs were shared with the authorities in Sri Lanka prior to the blasts. But unfortunately, they (plotters) succeeded,” said India’s Home Minister Rajnath Singh.

Asked if Sri Lanka failed to act on those inputs, he said it is not a question of blaming that country’s government for it. According to officials, intelligence inputs about a possible terror attack in Sri Lanka, targeting the Indian High Commission, were shared by Indian agencies with their counterparts in the island nation earlier this month after the National Investigation Agency completed its probe into an ISIS-inspired module planning to kill prominent leaders in south India.

The inputs were sent through diplomatic channels to Sri Lanka after a thorough investigation pertaining to the ISIS case in Coimbatore was carried out by the NIA, which has filed a charge sheet against seven people. During investigation, the probe team had stumbled upon videos of NTJ leader Zahran Hashim, which was indicative of a terror attack on the Indian High Commission in Colombo.

After further investigation which included cyber trailing of some of the accounts associated with the ISIS, the central security agencies shared an input with their Lankan counterparts about the churches being the likely target of the ISIS module, the officials said.

The government of India has advised the people not to undertake non-essential travel to Sri Lanka in view of the prevailing security situation in the island nation following the terror attacks.

In a statement, the External Affairs Ministry said, those undertaking essential or emergency travel can contact the High Commission of India in Colombo or the Assistant High Commission in Kandy, or its Consulates in Hambantota and Jaffna in case of requirement of any assistance. The helpline numbers of the Indian High Commission are available on the Mission’s website.

The Sri Lankan police which wrongly identified an American Muslim woman as a suspect in the deadly bombings has apologised for the goof-up. On April 25, the police had issued a flyer with the names and photos of six persons — three men and three women — wanted in connection with the attacks. On the flyer, a photograph of Amara Majeed was put wrongly by Sri Lankan authorities, identifying her as a suspect linked to the bloodshed.

The name attached to the picture was Abdul Cader Fathima Khadiya — but the picture was of Baltimore-born Majeed, whose parents are from Sri Lanka. “I have this morning been FALSELY identified by the Sri Lankan government as one of the ISIS Easter attackers in Sri Lanka,” she tweeted.”What a thing to wake up to!”

“This is obviously completely false and frankly, considering that our communities are already greatly afflicted with issues of surveillance, I don’t need more false accusations and scrutiny,” Majeed wrote on Twitter. “Please stop implicating and associating me with these horrific attacks,” Majeed urged. “And next time, be more diligent about releasing such information that has the potential to deeply violate someone’s family and community.” Sri Lankan police confirmed the error in a statement, saying “the individual pictured is not wanted for questioning”.

A Dubai-based Indian couple, who had a narrow escape in the Sri Lanka blasts, said the whole scene looked like a movie and unreal, recounting that they saw blood spilled everywhere as bodies were taken out from the hotel they were staying in.

Abhinav Chari, manager at a health insurance firm in Dubai, and his wife Navroop were visiting the island nation for a business trip and staying in the Cinnamon Grand Hotel, one of the targets in the series of bomb blasts that ripped through luxury hotels and churches on Easter Sunday.

Recounting the day, Chari said that he and his wife were in the middle of the Easter service when the priest requested people to leave the church premises calmly, saying he has received reports about bombings in other churches, the Gulf News reported.

“After we left the church we got into a taxi to go get some breakfast because that is what we would normally do after Easter mass. We started noticing a commotion on the roads and decided it was better to go back to the hotel,” he said.

He said that on reaching hotel, they saw everyone out on the lawn and thought that it was just some sort of security protocol. The gravity of the situation had not struck yet but soon it became clear that it was much more. Chari’s wife Navroop said, “It was too soon to know anything on the news or social media, we still hadn’t registered the scale of the incident. I could not believe what was happening in front of us.”

“It was all like a movie. I saw the ambulance come in … I saw the bodies being taken out. I saw the blood. It was too much and I could not believe it was real,” she said, adding that when they saw the news of churches and five-star hotels been targeted, did it sink in that this was huge. “We felt the attack was not something that was planned at a local level. It was something at an international scale,” she said.

Two Dubai-based Indians, Razeena Kukkady, 58, and Juno, 42, were killed in blasts. According to Sri Lanka’s Foreign Ministry, the number of foreign nationals who have been identified as killed remained at 40, including 11 from India.

Sri Lanka has a population of 21 million which is a patchwork of ethnicities and religions, dominated by the Sinhalese Buddhist majority. Muslims account for 10 per cent of the population and are the second-largest minority after Hindus. Around seven per cent of Sri Lankans are Christians. 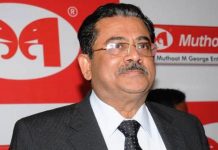 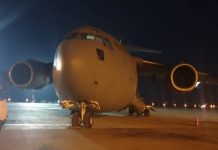