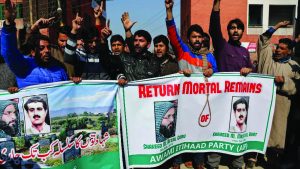 Compared with previous years, the death anniversaries of JKLF founder Maqbool Bhat and the parliament attack convict Afzal Guru were a low-key affair in Kashmir. On both days though — February 9 and 13 — the Valley observed hartal. Though call for hartal was given by the JKLF, the shutdown was largely observed spontaneously as the call this  year didn’t get the wide publicity online and in the local press that it otherwise got. Local press blacked out the news, so did the national media except the magazine Outlook. It’s local correspondent who filed the story was later questioned by police.

The days were also conspicuous by the absence of the separatist functions which so marked them, revealing the extent of control that the government has acquired over the situation. Similarly, the observance of the anniversaries was muted across the border in Pakistan and Pakistan Occupied Kashmir.

In past, militant leaders like Hafiz Saeed and Masood Azhar presided over the functions organized in memory of Guru. It was on one such anniversary in 2014 that Azhar had telephonically addressed a rally in Muzaffarabad and called for jihad against India. The outfit had subsequently formed Shaheed Afzal Guru squad which carried out several attacks in Guru’s name from India to Afghanistan. In 2016, the militants who attacked Indian consulate in Mazar-e-Sharif in Afghanistan and Pathankot airbase in India, claimed have done so to avenge Guru’s hanging. In Mazar-e-Sharif the militants before their death scrawled Guru’s name across the wall “Afzal Guru ka Intiqam (Afzal Guru is avenged).

Similarly, in November 2015, three Jaish militants stormed an Army camp at Tangdhar in Kashmir’s Kupwara district and were killed in the ensuing gunfight. A civilian was killed in the attack. The bags recovered from the slain militants had the markings of Afzal Guru squad.

Jaish followed it up with an in Gurdaspur, first in Punjab in eight years. Three militants in army fatigues barged into the Dina Nagar police station which falls between Gurdaspur and Pathankote towns. Seven persons including a Superintendent of Police, a Punjab provincial service officer, two home guards and three civilians were killed.

Both Guru and Bhat were hanged in Tihar jail in 1984 and 2013 respectively.  And both are buried there. So, there has been a long-standing demand among separatists in Kashmir to return their remains to the Valley.

Bhat was hanged In the first week of February 1984 after an unknown group ‘Kashmir Liberation Army’ abducted an Indian diplomat Ravindra Mhatre from India’s consulate in Birmingham. They demanded the release of  Bhat but killed the diplomat just two days after abduction. Thereafter, central government under Prime Minister Indira Gandhi speeded up Bhat’s execution who at the time was waiting for the review petition against his death sentence on the grounds that the case against him had several legal flaws.

However, unlike Guru who has since his execution been adopted by the militant outfits like Masood Azhar’s Jaish-e-Mohammad, which carried out the parliament attack, Bhat has largely remained a preserve of the JKLF. He has not been appropriated by any militant outfit. This could be because Bhat was hanged in 1984 and Guru in 2013 making the latter fresher in public memory.

In recent past, however, there was a twist in public perception of Guru’s role in parliament attack with the arrest of the J&K Police officer Davinder Singh along with two top Hizbul Mujahideen militants.

Before his execution in 2013, Guru in a latter to his lawyer in 2004 had claimed that Singh had asked him to take Mohammad, a Pakistani national who was identified as one of those who carried out the attack, to Delhi and arrange a flat for his stay. Now J&K DGP Dilbagh Singh has said that Singh’s alleged role in parliament attack will also be probed.