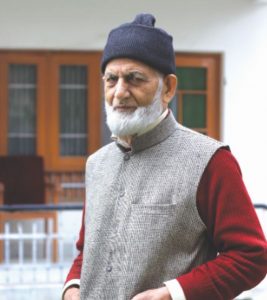 On February 12, the Pakistan chapter of the All Party Hurriyat Conference issued a press release alerting people to the deteriorating condition of top Hurriyat leader Syed Ali Shah Geelani, who is under house arrest for the past eight years.

“In addition to the general physical weakness, he has been experiencing for some time now, his chest infection is not satisfactorily responding to treatment. Thus, a state of complete uncertainty prevails,” said the statement signed by Saiyyed Abdullah Gilani in Islamabad. “So under these circumstances we can only pray and hope for the best and, at the same time. remain prepared for the worst”.

The statement also said that in case Geelani passes away the people should “immediately rush towards Eidgah where the funeral will be held”. A detailed route plan was also attached for people to attend the funeral saying it was important to notify it beforehand to pre-empt the total curfew and communication blockade which government was likely to impose after Geelani’s death.

The separatist organisation stated that the funeral prayers will be observed on the second day of the leader’s demise and would be led by Geelani’s eldest son. “All religious obligations would be conducted by the family,” the statement added.

“The people should be respectful and compassionate to each other and be vigilant of any mischief and accident. Kindly ensure your full cooperation to the volunteers,” read the press release which forced the government to take earnest security measures to prevent the adverse fallout of the development on the Valley’s fragile law and order situation. The 2G mobile internet which has only recently been restored was promptly suspended. It was released again only after the government was confident that the leader may not be that critical after all.

Later a statement was also issued by the Valley’s divisional commissioner Baseer Khan that Geelani’s health was stable and there was no need to panic.

As the situation stands, Geelani’s death is the last thing that  the government would want under the circumstances. Despite the peace largely holding over the past six months, the situation in the Valley just needs a trigger to tip into turmoil. And there can be no bigger trigger than Geelani’s death.

The separatist leader’s political career spans around sixty years during which he has been an endemic presence in the region’s politics. A leading figure in the politico-religious outfit Jamaat-i-Islami for the better part of his life, Geelani has been J&K’s foremost separatist politician over the past three decades. And he is considered most hard-line of all in his politics and has always rejected dialogue with New Delhi unless on his terms which among others seeks involvement of Pakistan too in the dialogue process.

And to top it all, he also rejects any new settlement proposals on Kashmir which detract from the implementation of the UN resolutions on Kashmir. And for this very reason, he had opposed the former Pakistan president Pervez Musharraf’s four point formula on Kashmir. Following this even Pakistan had turned its back on the leader till the time Musharraf was in power.

“His death will be of a profound political import for Kashmir, its fallout going far beyond its likely disruption of law and order,” said a political analyst on the condition of anonymity. “It will create a deep vacuum in the separatist politics and pave the way for transformation in uncertain and unpredictable ways”.