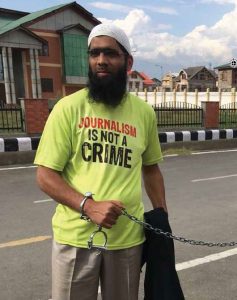 On August 31 night, a large contingent of J&K police laid a siege of the house of Asif Sultan, a journalist with a local magazine ‘Kashmir Narrator’. Some personnel scaled the wall and entered the house. They went to Sultan’s home and arrested him. They also seized his laptop and phone.

His family said that Sultan was in police custody for six days before he was formally arrested. “He was not produced in court for six days,” said the father, Mohammad Sultan Saida.

According to the police, they have seized “incriminating material” at Sultan’s home which established his complicity in “harbouring known terrorists.”

On September 8, a court in Srinagar sent Sultan in 15 days judicial custody. He has been shifted to Srinagar Central Jail. Police have told the court that Sultan was in touch with a Hizbul Mujahideen militant Abbas Sheikh and provided him “all the possible help to carry out terrorist activities.” Police have also accused him of “glorifying” militancy through his news reports. The trigger for his arrest is said to be the cover story on the slain militant commander Burhan Wani that he wrote for the magazine in July.

But for the journalists in Valley, Sultan’s arrest is a part of the pattern. Over the past two years, Sultan is the third journalist who has been picked up by the law enforcement agencies for their objections to their work. Earlier, it was Kamran Yusuf and Auqib Javeed who were questioned by the National Investigative Agency (NIA). In fact, Yusuf, a photojournalist, was detained for six-month before being released in March 2018. Similarly, Auqib Javeed, a journalist with ‘Kashmir Observer’ was also summoned to New Delhi and interrogated on July 14 and 15 this year over an interview with the separatist leader Asiya Andrabi.

Sultan’s father Saida said his son is being framed. “My son is a journalist, nothing else. He is being punished for his work,” Saida said.

On September 10, various journalist bodies staged a protest at Press Enclave in Srinagar against Sultan’s arrest. International journalist advocacy groups like Committee for Protection of Journalists (CPJ) and International Federation of Journalists (IFJ) have already issued statements condemning the arrest. Both the organisations didn’t buy the police charges pressed on Sultan.

“Police should immediately release Asif Sultan from jail and halt efforts to pressure him to reveal sources or become an informer,” said Steven Butler, CPJ’s Asia programme coordinator, in a statement.

“By reporting on militant activity, Sultan is performing an important public service, not committing a crime.”

Such intermittent arrests and questioning of the journalists in Kashmir have created fear among the media fraternity. Journalists worry that the Government wants to drastically circumscribe what should be reported and what should be left out.

“It is difficult to work in this environment. One cannot report fairly and reflect the situation as it exists on the ground,” said a journalist who did not want to be identified.

“If this goes on, journalists in Valley will be reduced to covering the government and development activities only. This has to be stopped.”

What makes the situation further fragile is that there is still no trace of who killed Bukhari and why? Police have blamed Lashkari- Toiba and identified three of its militants who have allegedly carried out the murder. But Lashkar on its part has vehemently denied any role in the killing and compared police investigation in to the case of a “Bollywood movie.”

Three months after the murder, police are yet to produce the charge-sheet in the case. “We are trying the loose ends in the case. And, it may take a little more time before we complete it,” said a senior police officer associated with the probe.

Journalists want some clarity on who killed Bukhari and so far the inability of the police to unravel the conspiracy has made the environment fraught for the media in Kashmir. This has created a sense of siege where journalists are feeling sandwiched between two hostile forces: Government on one hand and the militants on the other.

“Freedom of speech cannot be suspended even if the assembly is in suspended animation,” the powerful Kashmir Editors Guild said in a recent statement in response to the increasing pressure on the local media.

“The newspapers have routinely started getting notices to explain things that have gone in to print, there are very disturbing reports about reporters being asked to disclose sources, something that has not happened even during the emergency.”