Trade bodies in Kashmir have called for Kashmir bandh on Sunday to protest against attacks on Kashmiris in Jammu and other parts of India.

The bandh call has been issued by the Kashmir Traders and Manufacturers Forum, Kashmir Economic Alliance and other trade bodies.

In Jammu, a bandh call given by the Jammu Chamber of Commerce and Industries (JCCI) against the killing of more than 40 CRPF jawans in Pulwama terror attack evoked protests and violence leading to burning of scores of vehicles and injuries to a dozen. Though JCCI has condemned the violence, it has made little redeeming difference to the situation.

Similarly, there have been attacks against Kashmiris in other parts of the country.

Earlier, traders at the city’s commercial hub Lal Chowk observed a one-hour symbolic shutdown  as a mark of protest against attacks on Kashmiris. 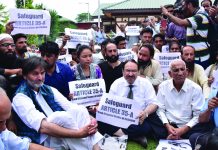