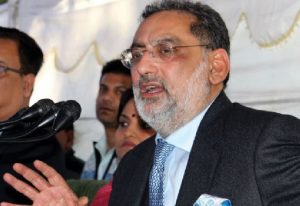 At least two major Kashmir politicians in recent past have plumped for separation of Jammu division from Kashmir and its upgradation into a separate state. First, it was Haseeb Drabu, the former J&K Finance Minister, who advocated separating Jammu from Kashmir in a write up.

Drabu said there was a need to “recognise that apart from an acrimonious history that the plains of Jammu and the valleys of Kashmir share, the two are chalk and cheese — ethnically, culturally, geographically, linguistically, politically, and in terms of religion.”

He added that “rather than resort to gerrymandering through delimitation, demographic change through domicile relaxation, and social engineering to convert a demographic majority into a political minority, it will be cleaner and less contentious to separate Jammu and Kashmir”.

Similarly Naeem Akhtar, who was a Roads and Buildings minister in the BJP-PDP government also called for Kashmir and Jammu split. “Jammu and Kashmir will continue to feel differently as for as politics is concerned, especially in view of the sharpening of Hindutva ideology. It is thus unfair to keep the two together,” Akhtar said in an interview to a local Kashmiri publication. “Unless it is to hold Kashmir through the Jammu bureaucracy why should they punish Jammu for Kashmir? In my thinking, why should Jammu suffer for us? Why not give them a representation, a chief minister, a state”.

It is rarely in Kashmir that politicians have batted for a separation of Jammu from Kashmir. In past, it was Sajad Gani Lone, then a separatist leader who had called for such a separation. In his then own settlement formula for Kashmir, Lone had argued that Jammu should be given an “opt out” option.

But other than that, separating Jammu from Kashmir has never been part of the political discourse in Kashmir. It has, however, a long political pedigree in Jammu with the RSS being one of its major proponents. In fact, Jammu statehood demand predates the demand for union territory status for Ladakh that has now been granted. And the inspiration for the demand for Jammu based groups has been the same it is now for the Kashmiri politicians: why should Jammu suffer for the troubles of Kashmir Valley.

The Jammu based parties like Panthers Party, the Dogra Sadar Sabha, the Ikkjutt Jammu and the newly-founded All Jammu Civil Society Forum (AJCSF) have been demanding status of statehood for Jammu for long.

In past, the RSS and the BJP have also been vociferous champions of the statehood for Jammu. The BJP had adopted four resolutions on reorganization of Jammu and Kashmir and the RSS had adopted one at Kurukshetra in 2002. The RSS had also founded Jammu State Morcha (JSM) in Jammu the same year. The Morcha even contested the 2002 assembly elections but failed to make a mark. But subsequently, the RSS and the BJP turned their back on the idea of J&K reorganization. And they stick to the stand.

Now after the revocation of Article 370, the chances of the statehood to Jammu look remote. In Jammu too, though the demand continues to be a part of the agenda of some parties, it has lost much of its earlier resonance among the people. More so, after the constitutional changes of August last. Now Jammu looks forward to getting a major role in the future regional governments. The delimitation commission set up by the government is set to grant more seats to the division in the Legislative Assembly, that can bring it at par with the Valley in terms of the number of constituencies.

But at the same time Jammu can’t escape the fallout of the troubled situation in the Valley. Like Kashmir, the internet has also remained suspended in Jammu over the past year despite
the absence of militancy and the unrest in the region. This is making a section of public opinion in the division root for separation from Kashmir.