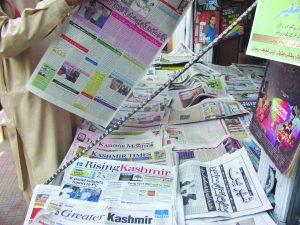 On March 10, the front pages of J&K’s Kashmir-based newspapers were blank. The one-line message in the middle of the page bounded by two horizontal lines with image of nib at the top read as: “In protest against attempts at subverting the institution of Kashmir media”

The protest followed a fortnight after the state government stopped advertisements to Greater Kashmir, the Kashmir Valley’s largest circulated newspaper and Kashmir Reader without giving any reason as to why this was being done. The step followed immediately after the Pulwama attack which killed over 40 CRPF personnel and led to a brief military confrontation with Pakistan. However, there is no formal order from the government stating reasons for the denial of advertisements. The newspapers were informed by the Directorate of Information and Publicity in Srinagar that they had orders to hold back advertisements to them.

Kashmir Editors Guild has termed the decision to stop the advertisements to two newspapers as a “negative” intervention on part of the government “clearly aimed at slaying the institutions of media”.

“Hitting the two institutions will impact the state and status of both, the journalists and the journalism in Kashmir,” the KEG statement said adding it will “fight the deliberate strangulation and subversion of the institution of media in the state”.

On March 10 also, the KEG held a protest at Kashmir Press Club against the government move. A group of the editors of the various dailies and the journalists met at the club to display the blank first pages of the newspapers.

However, the government so far has shown little inclination to explain the move, let alone revoke the order. No government official is ready to come on record on this. J&K being under the President’s rule has made things only more complicated.

“There is little public accountability for whatever this government chooses to do or not to do. It can afford to be arbitrary and willful and act on prejudice, sometimes with ideological motives ,” said a senior editor with a local newspaper who didn’t want to be identified. “In this situation, you really don’t know who to approach. This government can act on a whim and get away with it”.

Among the two papers, Greater Kashmir is the largest circulated newspaper and has been publishing since 1988, a year before the onset of separatist struggle. And ever since it has acted as a chronicler of Kashmir’s troubled three decades. Apparently, there is little in the coverage of the paper that could have raised the hackles of the government.

“Kashmir being a conflict-ridden place, we have to be extra-cautious to ensure our content meets the strictest journalist standards and is factually correct,” said a senior editor working with the paper. “State Government and its activities too get a substantial coverage, so does the prevailing situation in the state. This makes the order to ban advertisements all the more puzzling”.

Meanwhile KEG has sought the attention of the Press Council of India and the Editors Guild of India “to exercise their legal, ethical and professional mandate to intervene in the issue and ensure that the media in one of the most sensitive states is not strangulated”.

“Greater Kashmir is one of the most popular local dailies of J&K. Centre’s decision to stop ads to it should be viewed in context of their attitude towards press & electronic media in general. Kowtow to their warped agenda & sing praises. Or else suffer,” former J&K chief minister Mehbooba Mufti tweeted about the government decision.