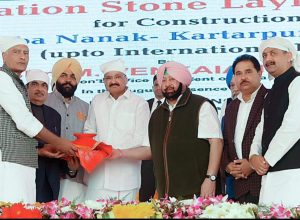 Punjab Chief Minister Captain Amarinder Singh on Monday joined Vice President of India, Venkaiah Naidu, in laying the foundation stone for the Kartarpur Corridor, and called for introduction of m-visa for pilgrims travelling through the corridor to visit the historic Kartarpur Gurdwara in Pakistan.

Captain Amarinder, who suggested that there should be no visa or passport for travel via the corridor, also announced his government’s decision to construct a grand Kartarpur Gate, which he said would stand out as a monumental symbol to commemorate the 550th Prakash Purb of Sri Guru Nanak Dev ji.

The Chief Minister urged Gadkari to try and ensure that the Corridor starts functioning by the next Gur Purab. He announced that he will accompany the first jatha from the corridor to Kartarpur.

Union Minister for Road Transport & Highways Nitin Gadkari, who was present on the occasion, approved Punjab government’s proposal for the construction of the Kartarpur Gate, to be called Kartarpur Dwaar. Gadkari also assured the people that his ministry would try to complete the construction work of the corridor expeditiously. 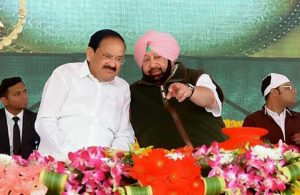 The Chief Minister, along with the Vice President, conducted the foundation stone laying ceremony virtually by sprinkling water brought from the Golden Temple by Amritsar MP Gurjit Singh Aujla. Captain Amarinder sought the blessings of the Sant Samaaj and members of other religious & social organisations, for the success of the project.

The eventful occasion was also graced by Punjab Governor VP Singh Badnore, who, along with Naidu and Captain Amarinder, planted saplings to mark the state government’s mission to plant 550 trees to commemorate the 550th birth anniversary celebration of the first Guru.

While the Vice President welcomed the Kartar Corridor as a unifier that would promote deeper understanding and a new resolve to connect the people of India and Pakistan, Captain Amarinder hailed the occasion as a welcome culmination of his government’s persistent efforts to facilitate Sikh pilgrims during the auspicious 550th Prakash Purb, being celebrated next year.

Addressing the massive crowd that had gathered at Mann village for the foundation laying ceremony, the Chief Minister thanked the Government of India for acceding to Punjab’s request for the development of the Kartarpur Corridor.

Praying to Waheguru to bless the devotees to have darshan and serve the Gurudwaras which had been distanced from the community for years, the Chief Minister also thanked the Government of Pakistan for deciding to commence the development of the Kartarpur Corridor on their side of the border.

The Vice President, in his address, hailed the project as the corridor of peace, humanity, unity and universal brotherhood. It promises to be, in many ways, the beginning of a new chapter in our efforts to bring two family members even closer, said Naidu, asserting that India believed that peace was an inexorable pre-requisite for progress and this could be achieved only if we have mutual respect and a stronger focus on the five Ps that underpin the global agenda for sustainable development- People, Planet, Prosperity, Peace and Partnership.

In his welcome address, Punjab Cooperation Minister and MLA Dera Baba Nanak Sukhjinder Singh Randhawa recalled the contribution of the Maharaja Bhupinder Singh, the Grandfather of Captain Amarinder Singh, for undertaking the sewa of reconstruction of Gurdwara Sri Kartarpur Sahib at a cost of Rs. 1.35 lakh in 1923, after the historic shrine was ravaged by floods. The Chief Minister also got the Kachha Road mettled in his earlier tenure from 2002 to 2007 to enable the devotees to offer prayers.