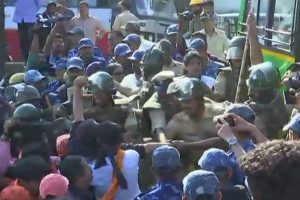 Security has been tightened in Karnataka on Saturday after shutdown called by protesters against observing Tipu Jayanti celebrations.

The shutdown has been called by various organisations, including the Bharatiya Janata Party (BJP) and Codava National Council. Section 144 has been imposed in several places including Kodagu, Hubli and Dharwad cities from 6 am on November 10 to 7 am on November 11.

BJP had appealed to the government to drop the celebrations after the JDS-Congress coalition government last week announced that Tipu Jayanti would be observed on November 10 in continuation of the previous Congress government’s policy.

However, Chief Minister H D Kumaraswamy is not scheduled to attend the function on “doctors’ advice”.

Various groups protesting against Tipu Sultan Jayanti celebrations in Madikeri offer prayers at Sri Omkareshwara Temple in the town. They will then carry out a procession against the celebrations, which are being observed in the state today.

The Karnataka government has decided to celebrate the birth anniversary of the controversial 18th-century ruler of erstwhile Mysore kingdom, Tipu Sultan.

Continuing its attack, BJP tweeted, “while Cong-JDS govt is celebrating a tyrant Tippu, the CM himself goes into hiding, what is the point of celebrating a fanatic when CM himself abandons a govt function. Glorifying a mass murderer just for vote bank clearly shows mindset of this govt.”

“There is lot of similarities between Congress & Tippu Both were anti Hindu. Both believed in suppressing Hindus. Both were responsible for Killing of Hindus.  Both believed in minority appeasement.  Both wanted to divide Hindus. No wonder Congress is worshipping tyrant Tippu,” BJP added. 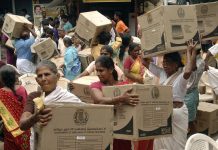