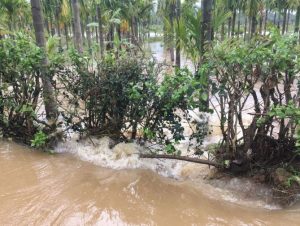 Heavy rains continued to lash Bengaluru and surrounding districts in Karnataka on Thursday.

The city had received rainfall of up to 6.6 cm in the last 24 hours, which flooded several major roads in the city, the Karnataka State Natural Disaster Monitoring Centre (KSNDMC) said.

Chief Minister H.D. Kumaraswamy have directed officials to be on high alert.

Rains have also been lashing south interior districts of Kodagu, Mandya, Tumakuru and Ramanagara and the northern districts of Raichur, Vijayapura, Koppal and Yadgir.

According to the India Meteorological Department, rains are likely to continue over the next two days in Bengaluru and adjoining districts.