A bench of Justices A K Sikri, S A Bobde and Ashok Bhushan of Supreme Court (SC) today heard the petitions of Congress and JD(S) against the Governor Vajubhai Vala decision of making BS Yeddyurappa, CM of Karnataka.

After an emergency hearing on Thursday, the top court said it will not put a stay on the swearing-in ceremony of Yeddyurappa but said its validity would depend on the outcome of the case.

SC today examined the letters dated May 15 and 16, written by Yeddyurappa to Governor Vala, staking claim to form the government.

BJP’s lawyer Mukul Rohatgi after handing over the letters to SC said, “Yeddyurappa has been elected as leader of largest party, BJP & he has support of necessary number of MLAs & is ready to prove it on floor of House.” “We have certain information that many MLAs from other parties have not given any kind of written support to Congress-JD(S),” he added.

SC said, “It is just a number game, one who enjoys the majority should be invited to form the Govt.”

“SC today observed that as BS Yeddyurappa has claimed support and BJP is single largest party, there could be two probabilities, whether Guv’s decision has to be tested or a floor test has to be held on Saturday.”

Abhishek Manu Singhvi lawyer for Congress-JD(S) combine said, “Yeddyurappa claimed support, but he does not have letters of support from these MLAs or it is only his oral submissions.” Under proper security arrangements, Congress-JD(S) are ready for floor test tomorrow.”

Supreme Court in its decision directs for floor test in Karnataka Assembly at 4 pm tomorrow.

Shobha Karandlaje of BJP speaking to reporters said, “We will prove majority on the floor of the House tomorrow, we are ready for floor test.” 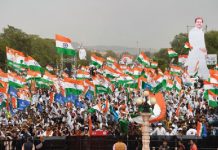