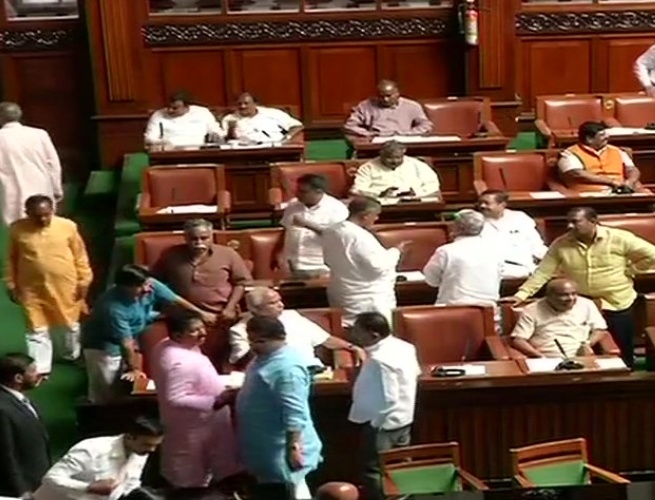 The HD Kumaraswamy-led Congress-JD(S) coalition government did not face a trust vote on Thursday.

The BJP members has decided to spend the night in the assembly to protest adjournment despite Governor Vajubhai Vala’s letter to Speaker KR Ramesh Kumar urging him to hold the trust vote on Thursday itself.

“Our MLAs will sit on an overnight ‘dharna’ in the state assembly demanding that the Speaker replies to the Governor’s letter and holds a floor test,” BJP Karnataka said in a tweet.

“The whole of this nation is seeing the desperation of @hd_kumaraswamy for power. How can anyone hold on to govt when they don’t have,” BJP Karnataka added.

Karnataka Speaker decided to adjourn the House until 11 am on Friday.

CM Kumaraswamy moved the motion for a trust vote after Supreme Court pronounced its decision on rebel MLAs’ resignations.

In his speech, Kumaraswamy accused the BJP of trying to put hurdles before his government.

The top court on Wednesday said that the Congress-JD(S) coalition MLAs in Karnataka should not be compelled to take part in the proceedings of the State Assembly.

After the resignation of MLAs, the coalition which formed the government with 117 lawmakers in the 224 Karnataka Assembly, will be left with 101 compared to BJP’s 107 including two independents.