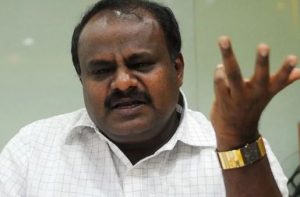 Karnataka Chief Minister HD Kumaraswamy has landed into a controversy after being caught on tape telling someone, over the phone to “mercilessly kill” to avenge the killing of a local leader of his Janata Dal Secular or JDS party.

In a video which has gone viral in social media, the Karnataka Chief Minister said, “He (H Prakash) was a good man. I don’t know who killed him in this way. Kill the miscreant mercilessly, there would be no problem.”

The JDS leader, H Prakash was killed by four assailants on Monday in Karnataka’s Maddur town in Mandya district.

However, Kumaraswamy later denied that he had given such orders and called them an “emotional” reaction.

Kumaraswamy said, “It was not my order, I was emotional at that moment. They (killers) are the reason for two murders and they were in jail. They came out on bail two days ago and killed another person (JDS leader Prakash), this is how they are misusing bail,” a news agency quoted.