Voting began in 15 Assembly seats in Karnataka on Thursday with the BJP government hoping to win at least six seats to remain in power in the state.

The elections are being held to fill the vacancies caused by the resignation and disqualification of the 17 Congress and JD-S rebels in July.

Voting began at 7 am and will end at 6 pm. The results for the by-polls will be declared on December 9.

The BJP needs six more seats to retain its majority in the 225-member assembly. The BJP currently has 105 MLAs (including an independent). 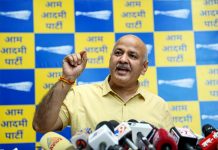