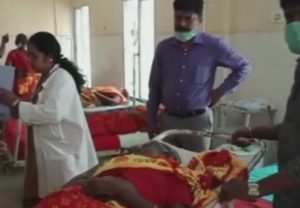 As many as 11 people died and over 80 were hospitalised on Friday after consuming food or prasad at a temple in Karnataka’s Chamarajnagar district, police said.

The tragedy took place at the Kichu Maranda temple in Sulivadi village,

An official claimed that some toxic substance may have got mixed with the prasad being served, resulting in the tragedy. “The samples have been collected and sent to a laboratory for analysis,” he said.

The ailing were hospitalised across Chamarajnagar and Mysuru districts.

According to the sources, when devotees consumed prasad, several of them began vomiting after it.

Chief Minister HD Kumaraswamy expressed shock over the incident and directed the authorities to ensure that the affected people receive proper medical treatment. He also announced Rs 5 Lakh ex gratia to the next of the kin of the deceased.

“This is an unfortunate incident. There are reports that the food was deliberately poisoned, and the samples were sent for testing. Action will be taken against whoever is behind this inhuman act,” Kumaraswamy said.