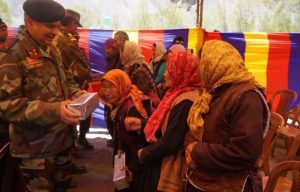 The Indian army organized a ‘Next of Kin’ rally on Sunday in J&K’s Ladakh region  as  part of the twentieth anniversary  of Kargil Vijay Diwas, to commemorate the victory of Indian Army in Kargil war.
“Hundreds of Veer Naris, veterans and NOKs (Next of Kin) from all over Eastern Ladakh region participated in a ‘Year of the NOK’ rally organised by the Kiari Brigade of the Fire and Fury Corps at Chumathang military station,” army said in a press statement.
On the occasion three medical officers from the Army Medical Corps, a dentist with mobile dental van and two specialist doctors from the civil administration provided health advices and medical facilities.
A total of 320 patients including 24 veterans, 4 Veer Naris and their dependents were treated.
The medical outreach was facilitated by the Fire and Fury Corps under the guidance of Mrs Ina Joshi, Zonal President AWWA.
The Fire and Fury Corps has reiterated the commitment of the formation in particular and the Indian Army in general, towards the well-being of retired Army personnel and their dependents, in the year which the Indian Army has designated as ‘Year of the NOK.

The Curse of IPL