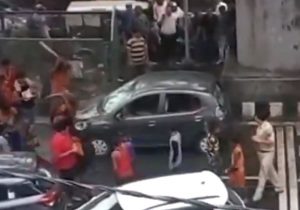 An outrageous incident took place on Tuesday evening when a group of ‘kanwariyas’ reportedly damaged a car in West Delhi’s Moti Nagar area after a car brushed one of them while driving.

The protestors attacked the vehicle with sticks, iron rods and later broke the windshield of the car and damaged it while turning it upside down after it allegedly brushed past them. The passengers who were inside the car managed to escape just in time.

The entire incident led to a massive traffic jam in that area.

However, no police complaint has been filed against Kanwariyas, said police.

Kanwar Yatra is an annual pilgrimage undertaken during the Shravan month.