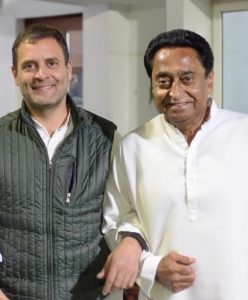 Kamal Nath, the Veteran Congress man on Thursday, chosen as the new chief minister of Madhya Pradesh after the party leadership cleared his name.

Congress extended best wishes to Nath for being elected as new chief minister of Madhya Pradesh.

“Our best wishes to Shri @OfficeOfKNath for being elected CM of Madhya Pradesh. An era of change is upon MP with him at the helm,” Congress tweeted.

The announcement came after a Congress Legislature Party met in Bhopal where former state Chief Minister Digvijay Singh and Guna MP Jyotiraditya Scindia were present in a show of unity.

Shiromani Akali Dal (SAD) leader Manjinder Singh Sirsa on Thursday had warned the Congress against naming Nath as Madhya Pradesh Chief Minister. Sirsa alleged that Kamal Nath was involved in the anti-Sikh riots that broke out in the national capital, after the assassination of then Prime Minister Indira Gandhi in 1984.