Justice Sharad Arvind Bobde will be sworn-in as the 47th Chief Justice of India (CJI) today.

According to the sources, President Ram Nath Kovind will administer the oath of office of CJI to Justice Bobde at 9.30 am.

On October 18, Outgoing Chief Justice Ranjan Gogoi had recommended Justice Bobde, the second senior-most judge of the top court, as his successor.

Justice Bobde has been a Judge of the Supreme Court since April 12, 2013. Earlier he served as the Chief Justice of the Madhya Pradesh High Court for about six months since October 16, 2012. He has also been an Additional Judge of the Bombay High Court from March 29, 2000 and a Permanent Judge from March 28, 2002.

Justice Bobde, born on April 24, 1956, was enrolled as an Advocate on September 13, 1978. He started his practice at the High Court Bench at Nagpur and the District Court at Nagpur and occasionally at the High Court at Bombay and the Supreme Court of India in civil, constitutional, labour, company, election and taxation matters. He specialized in constitutional, administrative, company, environmental and election laws.

Several labourers killed as truck runs over them in Gujarat; PM... 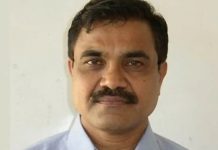