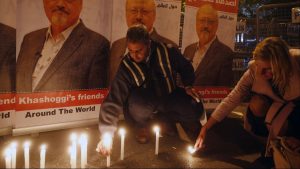 A lot has been written and spoken about US-based Saudi national and Washington Post columnist Jamal Khashoggi’s merciless killing in the Saudi Arabian consulate compound in Istanbul (Turkey) on October 2 by a group of 15 Saudis assigned the unholy task. The well-planned cold-blooded murder of the Saudi journalist, known and admired for his fiercely independent views, on a foreign land in a diplomatic facility and the way it was done have sent shock waves  across the world. The needle of suspicion points to Saudi Arabia’s Crown Prince Mohammad bin Salman or MBS for short, whose policies were invariably criticised by Khashoggi  through his columns. It is alleged that the whole operation was coordinated by a bodyguard of MBS. Yet there is no conclusive proof that the killer squad was sent to Istanbul at the behest of MBS.

The Saudi authorities have maintained that MBS had no prior knowledge of all that happened in their consulate in the Turkish city. Saudi Foreign Minister Adel al-Jubeir has asserted that the global outrage over the journalist’s murder in a diplomatic complex is “fairly hysterical”. As he told a regional defence forum meeting in Manama (Bahrain), the 18 arrested suspects are “Saudi nationals” and they would be held accountable “in Saudi Arabia”. Why is “this hysteria in the media before the investigation (already on in this regard) is complete”. He was, in fact, referring to Turkish President Recep Tayyip Erdogan’s repeated demand for the extradition to and trial of the 18 arrested suspects in Turkey as the crime was committed in Istanbul. The Saudi authorities have, however, refused to entertain the Turkish demand.

The probe has been instituted by Saudi Arabia by stating that this is how it could get to the bottom of all that happened on that fateful day inside its consulate. However, there is a conflict of interest and, therefore, experts believe that the outcome of the enquiry may not satisfy the world community, feeling greatly concerned about the torture and gruesome elimination of the eminent journalist. It is considered a frontal attack on the freedom of the press.

It is also believed that the Saudi probe will be a prolonged exercise with a view to getting the world’s attention diverted from the Khashoggi factor. According to a controversial US-based Saudi national and critic of Saudi rulers, Dr Saad Al-Faqih, all efforts will be made to ensure that MBS remains unaffected by the crisis caused by Khashoggi’s killing. He told the Al-Jazeera news channel the other day that any number of people can be proceeded against and executed not only to show respect to the world opinion but also to save MBS. Besides the18 suspects taken in custody by the Saudi authorities, five highly senior officials, including the deputy head of the Saudi intelligence network, have been summarily sacked.

Most Middle-East experts are of the view that execution of anyone even after following the due process of law will not be in the interest of justice as this may result in the elimination of those who are aware of how the killing was accomplished and exactly at whose behest. Once they are taken to the gallows, the truth will never out.

Turkey has also held its own enquiry and one can easily understand that its results would be uncomfortable for Saudi Arabia. President Erdogan of Turkey appears to be using the incident not only to create a wedge between the US and Saudi Arabia but also to ensure that Riyadh’s plans for massive diversification of its oil-based economy go haywire. MBS has introduced a number of social reforms and is in the process of rejuvenating the Saudi economy keeping in view the situation likely to emerge in the future when its petroleum resources will not be sufficient to meet its growing needs.

King Salman of Saudi Arabia has reportedly withdrawn some of the powers given to MBS, but the King cannot afford to go too far to take any harsh step against the Crown Prince. MBS is actually indispensable for his country at the moment. Besides the economic diversification drive he has launched, MBS has also got Saudi Arabia fully involved in the war against the powerful Huthi tribe in Yemen, where the established system faces a serious threat to its survival. It is a matter of prestige for the Saudis that the Huthis, belonging to the Shia sect and getting massive support from Iran, are defeated. Besides Yemen, Saudi Arabia is also involved in the civil war in Syria, where pro-Saudi Sunni groups have been up in arms against Syrian President Bashar Al-Assad, a pro-Iranian ruler.

All that is going on in the Middle-East has sharply divided it into two camps, one led by Saudi Arabia and the other by Iran. The Saudi camp has the UAE, Egypt, Jordan, Kuwait, Bahrain, Yemen, Oman and Lebanon, and the Iran-led camp includes Iraq, Syria and Qatar. Interestingly, Turkey, a non-Arab Sunni Muslim-majority nation, and Qatar, a Sunni monarchy, are associated with the Iranian camp. Qatar, the world’s richest nation, joined this camp only recently because of the Qatari rulers’ differences with the Saudis (MBS for all practical purposes). The Saudi group has the patronage of the US whereas Russia and China are doing all they can to protect the interests of the Iranian camp followers. Turkey, which was earlier virtually playing no role in the West Asian politics, is fully involved in the developments in the region now as it got affected considerably by the emergence of the Islamic State of Iraq and Syria (ISIS) factor, though a thing of the past today. The atrocities committed on the people in the ISIS-controlled areas led to a large-scale exodus into Turkey, Germany and other European countries.

Turkey under President Erdogan has posed a serious challenge to Saudi Arabia as the leader of the territories under the sway of Islam. Its economy is in the process of recovering fast after the end of the US-Turkish tensions following the release of American pastor Andrew Brunson from captivity in Turkey.

Turkey, perhaps, thinks that now it is the turn of the Saudis to suffer at the hands of the US and other Western nations  for what its nationals did in Istanbul as Khashoggi was living in the US under self-imposed exile. The refusal by many Western executives and government officials to attend a high-level investment conference in Saudi Arabia in the wake of Khshoggi’s killing was considered by the Turks as something quite expected.

The Turks are apparently happy that while President Donald Trump has been putting considerable pressure on the Saudi rulers to bring to book those found to have been involved in Khashoggi’s murder, the US Congress has called for imposing sanctions on Riyadh. But will the US really do what it has been threatening? The US needs Saudi Arabia as a balancing factor against Iran and that means whatever the Saudis’ do to satisfy the international community on the Khashoggi issue is likely to be acceptable to the US administration.

This inference can be drawn when looks closely at President Trump’s statement that the arrest of the18 suspects by the Saudi authorities is “a good first step” towards punishing the guilty. He has described as “credible” the steps taken by Riyadh like the institution of the enquiry into Khashoggi’s murder. This means the Saudi probe may lead to some small fry being sacrificed at the end of it all. If this really happens, that will send across the sad message that the US under President Trump will not hesitate to sacrifice the cause of justice for safeguarding Washington’s national interests! 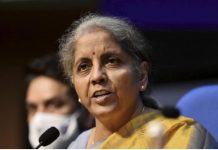