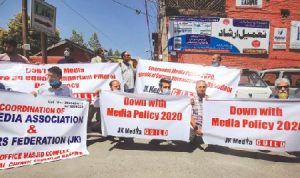 On July 6, a group of Kashmiri journalists staged a protest in Srinagar against the new J&K media policy and urged the government to withdraw it. This was the first such protest against the policy that was issued in early June. The policy gives the government power to decide what is fake, unethical and anti-national news. And if it finds any journalist or media organization culpable on these counts, it will take legal action against the journalist or media organisation concerned including stopping government advertisements.

The journalists at the protest were holding the banners carrying slogans like ‘Don’t gag media’, ‘Down with media policy’ and ‘brainchild of corrupt bureaucracy’.

“The government has taken upon itself the role of the editor, printer, and publisher of newspapers in the Union Territory,” said Rashid Rahi, the president of J&K Editors Association which was part of the protest.

The new media policy has deepened the anxiety among the local media which has been at the receiving end of the extraordinary situation following the revocation of Article 370 on August 5 last year. The security lockdown and the communication blockade that followed the decision has hit the Kashmir media hard. Journalists didn’t have an internet connection to file their stories. The newspapers too struggled to get the news content. Though the government later put together ‘Media Facilitation Centre’, initially only with four computers, it made no difference. The communication gag has been eased since, with the media given high-speed access to internet, but this hasn’t made any redeeming difference to the prevailing pathetic state of journalism. In terms of freedom of expression, the situation has progressively worsened as recent FIRs against some senior journalists bear this out.

Earlier the administration had stopped advertisements to three prominent regional newspapers – the Greater Kashmir, Kashmir Reader and Kashmir Times. Though advertisements to Greater Kashmir have since been released, the other two papers still don’t get them. And seeing their plight most other papers have brought their content in line with the government expectations. The government and its activities, covered mainly by its public relations department, get the pride of place on front page. The news if any is strictly restricted to apolitical issues like economy and environment.

There is no scope for in-depth, investigative reports or the ones that objectively reflect the ground situation. Separatist politics and the security environment, dominant concerns of the Valley’s life for the past three decades, have become no-go areas for local journalists. Now inside pages too are largely filled up with press releases of the Information Department.

Each newspaper with a minor exception has become a PR effort undertaken on behalf of the government, less in lieu of the government adverts and more for fear of what might follow should they decide to take an independent line.

“J&K has significant law and order and security considerations, it has been fighting a proxy war supported and abetted from across the border,” reads the 50-page policy document. “In such a situation, it is extremely important that the efforts of anti-social and anti-national elements to disturb peace are thwarted”.

The new policy has made mandatory a background check of newspaper publishers, editors and key staff before empanelling them for government advertisements, apart from security clearance before a journalist is given accreditation.

There is, as such, deep anxiety among the media fraternity in Kashmir. There’s fear that the new media policy would make it impossible to do journalism in Kashmir.  “Media has done an amazing job in Kashmir by reporting honestly and objectively the situation in the state. The local media with its exclusively Valley-centric focus has helped uncover the shades of the truth that have otherwise found little resonance in the larger Kashmir debate,” read an editorial in a local daily. “The administration should therefore have let the media be”.