The Indian Women’s Press Corps, Press Club of India, Press Association and Federation of Press Clubs of India condemn the threatening and intimidating remarks made by an elected member of the Jammu and Kashmir Assembly directed at journalists in the valley.

BJP MLA and former minister Chaudhary Lal Singh warned journalists at a press conference in Jammu to “draw a line” openly threatening them with consequences and warning them of a fate similar to that of Shujaat Bukhari, the editor of Rising Kashmir who was shot dead less than a fortnight ago.

Bukhari’s assassination was condemned by a wide section of people and journalist organisations.

Chaudhary Lal Singh also blamed  journalists in Kashmir for creating a “wrong atmosphere” and told them to “control” themselves. The lawmaker had been dropped from the Cabinet after he joined a rally that supported the accused of the Kathua gang rape and murder.

The Journalist organisations demand that strict action be taken against the lawmaker for making threatening remarks hinting possible violence at journalists in the valley. Such statements are nothing short of criminal intimidation and a direct attack on the freedom of the press. They also serve to vitiate the atmosphere and endanger the lives of journalists who work and live precariously in areas under conflict. 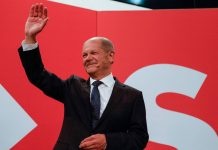