A seminar on ‘Media Studies: Pedagogic and Methodological Engagements’ was recently organised by the Jawaharlal Nehru University’s Centre for Media Studies (CMS). Several young researches of the CMS came up with refreshing inputs to their research findings and ground realities based on their field work.

Researcher Mithilesh Priyadarshi’s work on the 2013 riots in western Uttar Pradesh carried several crucial aspects to reporting from the mofussil towns. In fact, he not just spoke of the role of the local correspondents and stringers but also highlighted the crucial ‘connect’ between the readers and newspapers during communal rioting and the aftermath. How I wish he publishes his stark findings in a national daily so that many would get to grasp the harsh realities prevailing in that entire stretch, not very far from the national capital New Delhi.

And whilst I was chairing a session on ‘notes from the field’, I was wondering why on earth we have stopped focusing on these very crucial aspects to journalism and journalists! Why is it that the general public thinks journalism to be one of those highly glamorous professions. No, it isn’t! Its tough and tougher it gets, especially if one is reporting from the so-called ‘conflict zones’, ‘disturbed areas’, ‘Naxal belts’. In fact, detailed accounts of two senior journalists — Smita Gupta and Sonia Sarkar — of their experiences whilst reporting from conflict zones and situations, were not just stark but absolutely honest portrayals of the challenges, together with the hurdles and difficulties that reporters face whilst trying to unearth an story and then detail the findings. They could die but that reportage has to be done!
Other speakers focused on varying interesting and offbeat dimensions to journalism. Dr Mohinder Singh focused on the beginnings of Punjabi journalism in the undivided Punjab. Senior journalist Ajit Kumar Jha spoke of the ground work required for setting up of new newspapers (after all, he is the founder editor of the Oman Tribune in Muscat and the Qatar Tribune in Doha). Author and head of INTACH’s Delhi chapter, Swapna Liddle, traced the history of pre 1857 Delhi through Urdu memoirs and writings.

I could go on and on as the sessions were laced with fresh and hitting findings. In fact, Head of the Journalism Department of the Islamic University of Science and Technology (IUST) situated in Kashmir’s Awantipora)), Dr Ruheela Hassan, did not mince words whilst focusing on the daily round of struggles faced by journalists in the Valley. Peaking as never before in these recent years. To quote her — “The struggle of media in Kashmir throughout its evolution is witness that the media in Kashmir has never enjoyed real freedom. Be it the Dogra Rule in 1924, nationalist government (1947-1953), Sheikh Abdullah (1948-1953), Ghulam Mohamad Bakshi (1953-1963), Ghulam Mohamad Sadiq (1964-1971), National Conference (1975-1982/1986-1990), media in Kashmir has never breathed free air. At one time, the state was resistant to granting permission and when the permission was granted their freedom was curbed, strict laws and regulation like Jammu and Kashmir Press and Publication Act of 1932 were introduced and implemented to ban publications, seize printing presses, or demand heavy securities from the journalists.

“After India gained independence, it guaranteed freedom of speech and expression to all its citizens including the citizens of the State of Jammu and Kashmir, but nothing changed for the press. Older laws were amended and new laws were implemented to muzzle the press. …The inordinate circumstances in Kashmir from 1990s further worsened the scenario. Not only the freedom of expression was endangered, but there were now increased threats to the life of journalists. Their freedom of movement and right to assess information was also snatched. Several journalists lost their lives and many were put behind bars. Journalists also fought several battles with the state. Some struggles they won, such as withdrawing of Press Bill by state, and some they lost.”

And just when I thought, enough stark realities to the varying dimensions to the media have come to the fore, came in Ravish Kumar’s latest book — The Free Voice (Speaking Tiger) where this brave journalist writes ever so strongly about the times we are living in. He highlights the fear factor hitting and gripping us on a daily basis; scared that we are of the very system and of those who are manning it. Yes, the scare of the aftermath of criticizing the fascist rulers holds sway.

Ravish Kumar does not shy away from detailing his own fears as a journalist. To quote him from the opening essay ‘Speaking Out’ in his book — “ ‘Now, whatever will be, will be.’ This closing sentence of the NDTV India Prime Time Show of November 23, 2017, was for my viewers and also for myself .I had found release from the fear that had held me in its suffocating grip for two days. Through the duration of the show, I’d felt that every single word was holding me back, as if to warn me: ‘Enough, don’t go any further. You cannot put yourself in danger just to overcome your fear. Fear does not end after you’ve spoken out. Even after you’ve spoken, fear lies in wait for you with its nets and snares.’ But I had spoken and I was free.”

And I simply loved these un- complicated lines. Perhaps, they are of significance not just for the media personnel but for the masses trying to fight the injustices heaped on the disadvantaged. To quote him — “Ask yourself one question: Are you afraid of speaking out, of criticizing authority? Why are you afraid? Do you choose a system only to inflict fear on yourself? Are you scared of being killed or being isolated, of being alone? If you are not fearful of being killed, then also banish the fear that you will fall alone among your friends. You can risk at least this much. If you have friends whose devotion is to something you think to be wrong, tell them that. If you cannot speak up before friends, how will you ever stand before the government to criticize it? You will have to start practising speaking up somewhere. Things aren’t so bad yet that no one can speak out.”

Yes, it’s time to speak out, loud and clear. Otherwise, unsaid thoughts and unleashed emotions have the tendency to throttle and kill the very spirit, if not the form. But whilst speaking out, one ought to be laced with precise and thorough and exact facts. Young and daring researchers and journalists focusing on the media should put forth their stark findings at various forums and platforms so that ground realities are projected. Seminars and talks and meets and discussions on the ground realities are actually a must in the times we are surviving in. Several realities I heard at JNU’s Centre for Media Studies, were refreshing and offbeat and for that one must thank the entire faculty of the CMS, particularly Dr Rakesh Batabyal. 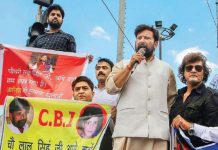