Jodhpur court on March 20 has directed the Rajasthan Police to register an FIR against Indian cricketer Hardik Pandya for his alleged tweet on Dr Bhim Rao Ambedkar on the issue of reservation.

Pandya’s tweet which he posted on December 26, 2017 says “Which Ambedkar ??? The one who drafted a cross law and constitution or the one who spread the disease called reservation in the country.”

This tweet was purportedly posted on his twitter account which insulted an Indian jurist and social reformer Ambedkar and the sentiments of the people of his community.

Reportedly the petition was filed in Jalore District of Rajasthan by DR Meghwal, an advocate and a member of the Rashtriya Bhim Sena (an organization working for the rights of SC, OBC caste peoples and others also).

The petition was filed under the SC-ST Act.

Offended by Pandya’s tweet Meghwal said: “I learnt about Pandya’s comment through social media in January. It appeared quite derogatory for a figure like Ambedkar and was an attempt to spread hatred and create division in the society,”

He added, “By doing so, he has committed a serious crime and hurt the sentiments of my entire community.” 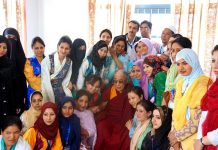